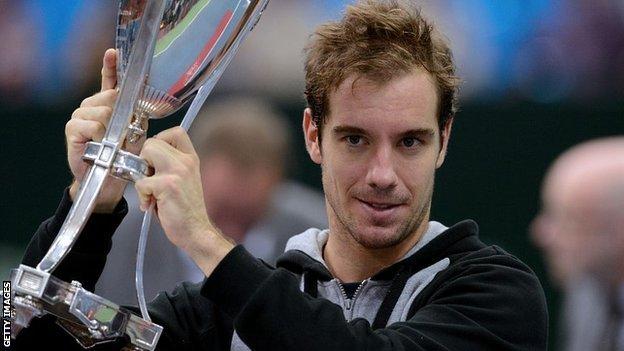 Richard Gasquet beat Mikhail Kukushkin in the Kremlin Cup final to leapfrog Jo-Wilfried Tsonga in the race to reach the ATP World Tour Finals in London.

Gasquet will now occupy the final qualifying spot for the 4-11 November season-ending event in London when the rankings are updated on Monday.

Standings will be updated on Monday, 21 October

"It is one of my most successful seasons but the race for a place in London is not over yet," he said.

Germany's Tommy Haas boosted his chances of reaching the London showpiece by winning the Austrian Open.

Haas defeated Robin Haase of the Netherlands 6-3 4-6 6-4 to take his second Vienna title, 12 years after picking up his first.

"Three and a half years ago, I was really asking myself if it made sense to continue," said Haas.

"But I have been paying a lot of attention to my fitness and nutrition and I am always looking to improve my tennis."

The final line-up for the eight-man Tour finals will be confirmed after the Paris Masters, which runs from 28 October to 3 November.

Andy Murray's withdrawal following back surgery has opened up an extra place in the event, meaning the ninth-ranked player will qualify.

Former world number one Roger Federer said he would not mind missing out on the event if it means his fellow Swiss Stanislas Wawrinka makes the cut. Wawrinka is currently seventh, one place above Federer.

"I'll be happy if Stan qualifies," said 17-time Grand Slam champion Federer. "If that means I'll miss it, I honestly don't care. It means he was the better player for the year.

"I'm always happy for his results. I don't see it as a rivalry as such. We'll see at the end of Paris how it's all going to pan out."

And Caroline Wozniacki won her first event since last year's Kremlin Cup with victory in the Luxembourg Open final.

The top-seeded Dane defeated Germany's Annika Beck 6-2 6-2 to register the 21st title of her career.