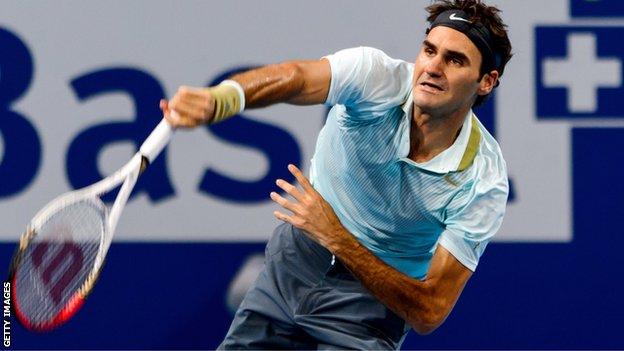 Roger Federer beat Adrian Mannarino 6-4 6-2 in the first round of his hometown Swiss Indoors event in Basel.

Standings correct as of Monday, 21 October

Federer, 32, won the final five games in succession against the 25-year-old Frenchman to progress in 71 minutes.

The five-time champion needs to perform well in Basel and the upcoming Paris Masters to retain hopes of qualifying for the eight-man ATP World Tour Finals tournament next month.

"I'm concentrating on playing well and hoping to qualify for London," he said.

The top eight-ranked players in the ATP rankings qualify for the World Tours Finals at the O2 Arena, which runs from 4-11 November.

Britain's Andy Murray has already withdrawn from the season-ending event in London as he continues his recovery from back surgery, meaning ninth place with qualify.

Seventeen-time Grand Slam winner Federer will face either Uzbekistan's Denis Istomin or Argentina's Horacio Zeballos in the second round in Basel.

Federer has qualified for the season-ending tournament every year since 2002, winning it six times.