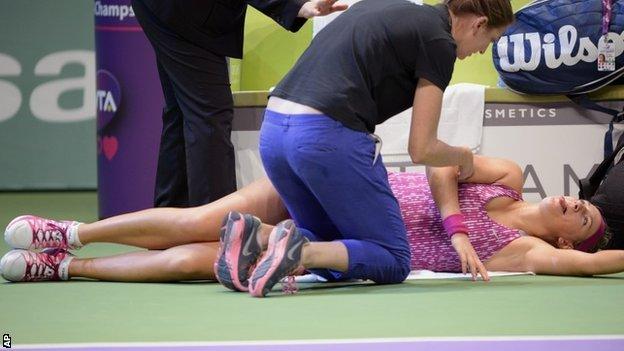 China's Li Na moved into the semi-finals of the WTA Championships for the first time with a 6-2 6-1 victory over Victoria Azarenka in Istanbul.

World number two Azarenka needed treatment on a back injury at 2-3 in the opening set and lost the next eight games as Li eased to victory.

The result means Jelena Jankovic, who lost to Sara Errani, will meet Serena Williams in the last four.

Azarenka has been assured she's caused no 'structural damage' to her back by playing through the pain against Li Na - but after her triumph in Melbourne in January, it's been an uncharacteristically poor end to an injury-hit season.

Can anyone else trouble Williams in her absence? Kvitova has the tools, but not the consistency, and Li is a match for everyone except, historically, Serena.

Li will face Petra Kvitova, who saw off Angelique Kerber on Friday.

Czech Kvitova recovered well from the setback of losing the first set to her German opponent after taking a 4-1 lead.

Jankovic suffered a 6-4 6-4 defeat by Errani, but it did not matter as the Italian was eliminated on Thursday.

The result meant Jankovic, Errani and Azarenka all ended up with one win but it is the Serbian who progresses courtesy of her superior sets record.

Azarenka revealed after her defeat by Jankovic on Wednesday that she was mentally fatigued and struggling for motivation but it was a back problem that scuppered her hopes on Friday.

The Belarusian has withdrawn 25 times either before or during matches over the past eight seasons, but she battled through against Li despite her restricted movement.

"There is a no-win situation, retiring and it being discussed," she said when asked why she did not pull out.

"I don't have a tournament next week. The physio told me there is no real structure damage but you can't fix it that quickly.

"The most important thing is I just wanted to try to do my best for the fans who came and watched our match, and out of respect for my opponent."

Victory for Li sent her beyond the group stages for the first time at the year-end championships.

"The match was not about tennis or about fitness, it was only about mentality," she said.

"Because I thought maybe after the first set she would give up but she still tried to continue to play."