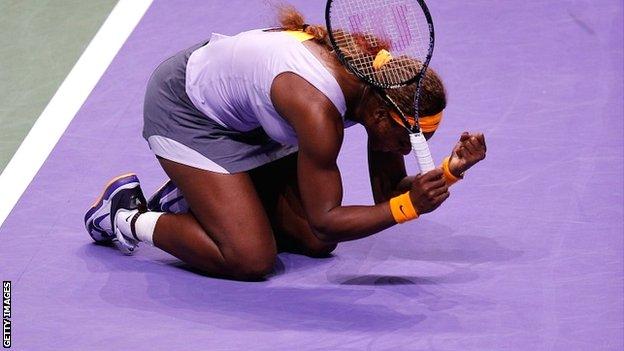 Li, the world number three from China, raced ahead and secured the first set in Istanbul with her fourth set point.

But Williams, 32, levelled the match and clinched her 11th title of the year in two hours and nine minutes.

The American has won 78 of 82 matches this year and will finish the year as the top ranked player for the third time in her career after 2002 and 2009.

"Sheer willpower helped Williams over the line after an opening set which suggested that although her mind was willing, her body wasn't.

"As the defending champion summoned up enough energy for one last push, Li's excellent start disintegrated. The memory of nine previous defeats to Serena seemed to cloud her mind as the double faults began to clock up."

It was her fourth WTA Championships success and she is the first player to defend the title since Justine Henin in 2007.

She is the eighth female player to win 11 or more titles in a year and the first since Martina Hingis claimed 12 in 1997.

Williams said lifting the Billie Jean King trophy had a special significance at the end of the year when the WTA has celebrated its 40th anniversary.

"It was an awesome year of tennis. To end with the Billie Jean King trophy after 40 years and after everything we had the celebration for this year, I don't know if it's written or what, but it's just really exciting," she said.

"I haven't had a lot of time to think about it, but I'm happy. I'm really happy that I was able to finish it off."

In the first WTA final between two players over 30, Li made a confident start to take the opening set against Williams, who was showing signs of fatigue.

Williams won a key game at the start of the second that went to nine deuces and lasted nearly 12 minutes, but Li levelled at 3-3 with her only ace of the match.

However, a double-fault and a forehand error gave Williams a chance to serve out the set, with three set points required to close it out.

Another double-fault by Li gave Williams a break of serve at the start of the third and the 17-time Grand Slam winner swiftly completed her 10th win in 11 matches against the new world number three.

"I've just had a really long year, and I'm just really excited, honestly. I really didn't expect to get through this match today," Williams added.

"I can't believe I won. I was so tired. Honestly, did I really win? Because she played so well."

Li, 31, who served 10 double faults in total, said: "I was feeling maybe the start of the match was too exciting. So after one and a half sets I was feeling I had no more energy left."