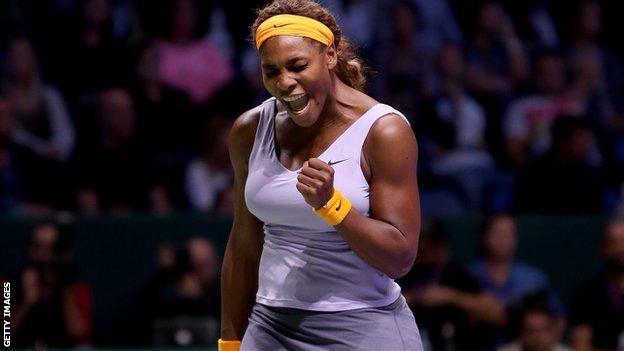 Serena Williams's coach Patrick Mouratoglou says the world number one can do even better next year.

Williams retained the WTA Championships on Sunday, her 11th title of the season, to improve her 2013 record to 78 wins with only four defeats.

"We've spoken about 2014 already with goals to do better than this year because I think it is possible," Mouratoglou told BBC Sport.

"If we keep this mentality I don't see any reason why she would slow down."

American Williams, who came from behind to beat Li Na in three sets in Istanbul, has won 20 more matches this season than she has ever managed previously.

Even at the age of 32, Williams says she cannot imagine life without playing tennis.

Roger Federer, also a 17-time Grand Slam champion, is 49 days older than Williams and the Swiss has experienced a slide down the men's world rankings this season.

In contrast, Williams has had arguably the most successful season of her career.

"She has 100% of her physical abilities today, which counts for a lot," said Mouratoglou.

"Maybe that's one of the reasons why Roger hasn't been able to play his best tennis this year. He has physical issues, but Serena doesn't. She's at the top physically.

"As I said to her when we started working together, we have to make sure you don't get injured: that is the first goal. So we did a lot of work on her body.

"The team worked with her to help her get stronger because everybody has weaknesses in his or her body. Her fitness is at the top, along with her will and dedication."