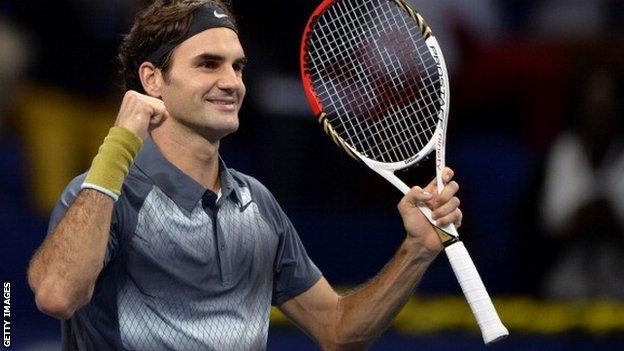 Roger Federer qualified for the season-ending ATP World Tour Finals thanks to a convincing victory over Kevin Anderson in the second round of the Paris Masters.

It ensures the world number six will participate at the season-ending event for the 12th consecutive year.

"It's been a tough year so this is a bit of a highlight," said Federer.

"Swiss bankers in Canary Wharf won't be the only ones rejoicing at Federer's qualification. The quick indoor courts on offer at this time of year are very much to his liking, and he will now be very confident about his chances in London.

"He would prefer to avoid Novak Djokovic in the draw, but the O2 offers Federer the chance to improve his record against Rafael Nadal, who is always hindered by the surface at the end of season event.

The 17-time Grand Slam champion has won just one tournament this season - the Gerry Weber Open in Halle - but has done enough to equal Ivan Lendl's record for successive appearances at the season finale.

Eight places are available for the Race to ATP Finals, but following Wimbledon champion and world number three Andy Murray's withdrawal with a back injury the list was extended to ninth place.

Federer's involvement at the event was in doubt following a poor year by his standards, but victory over South African Anderson ensured that he had enough points to appear at London's O2 Arena.

He added: "I'm a little disappointed about the end of the match - it could have gone 5-5.

"I don't know if I'm doing anything wrong or it just happens to be the time my opponents are doing well. I think it was overall very solid."

There were also victories in the Bercy arena for Rafael Nadal, David Ferrer, Juan Martin Del Potro and Stanislas Wawrinka.

"It's been an extraordinary season so far and I just want to keep it going and finish the year the way that I can," said the French and US Open champion who reclaimed the world number one ranking earlier this month.