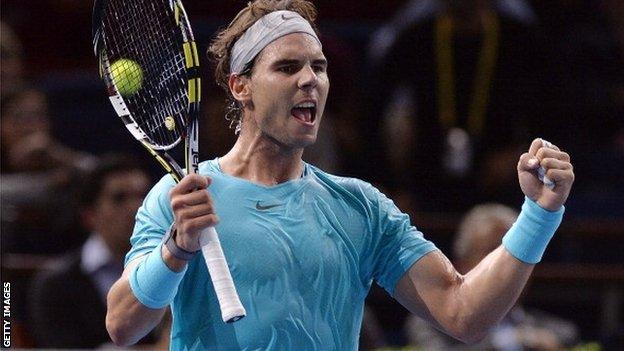 Top seed Rafael Nadal and second seed Novak Djokovic have progressed to the quarter-finals of the Paris Masters.

Roger Federer will meet Juan Martin Del Potro in the last eight thanks to a 6-3 6-4 win over Philipp Kohlschreiber.

It was also a good day for Stanislas Wawrinka and Richard Gasquet as they both qualified for next week's season-ending ATP World Tour Final in London.

Swiss Wawrinka defeated Spain's Nicolas Almagro 6-3 6-2 to book his place in the last eight and he qualified for London for the first time thanks to Milos Raonic's 7-6 (15-13) 6-4 defeat by Tomas Berdych.

Frenchman Gasquet - who beat Kei Nishikori 6-3 6-2 and will next play Nadal - will also be competing at the O2 Arena as Canada's Raonic was the only other player who could have qualified for the eight-man event.

Djokovic, 26, will face Wawrinka - a man who took the Serb to five sets in a thrilling US Open semi-final in September - for a place in the last four in Paris.

"It's a big challenge for me and Wawrinka also," said the Serb.

"Whenever we play each other it's long exchanges, a very tough match mentally [and] physically - but I'm ready for it."

Federer, who secured his place at the ATP World Tour Finals on Wednesday, said his quarter-final clash with Del Potro was a significant one.

Del Potro, who beat Federer last week in Basel to retain his Swiss Indoor title, battled to a 3-6 6-3 6-4 victory over Grigor Dimitrov at the Bercy arena.

"It's an important match for both of us and also looking ahead to London where we could meet there," said Federer.

"It could give one of us an advantage for London so it's a key match."