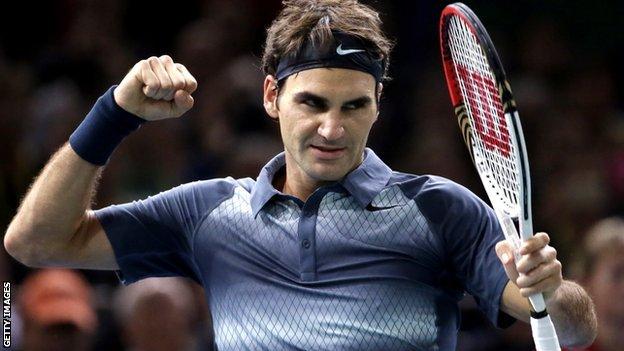 Roger Federer will meet world number two Novak Djokovic in the semi-finals of the Paris Masters on Saturday as he targets his 22nd career Masters title.

Djokovic, 26, moved into the last four after a decisive 6-1 6-4 win over Stanislas Wawrinka.

World number one Nadal despatched the French player 6-4 6-1, but fellow Spaniard Ferrer had to come from a set down to beat Tomas Berdych 4-6 7-5 6-3.

Federer, 32, qualified for the season-ending ATP World Tour Finals on Thursday thanks to a convincing victory over Kevin Anderson in the second round.

But he had lost his fifth straight match to Del Potro in the final of the Swiss Indoors on Sunday.

However, Federer made no mistake in the French capital - with the match poised at 3-3 in the deciding set, he broke twice to see off a wearied Del Potro.

The victory moves the veteran Swiss a step closer to claiming only his second Paris title since his initial 2011 success, and primes him for a push to claim the World Tour Finals title in London next week.