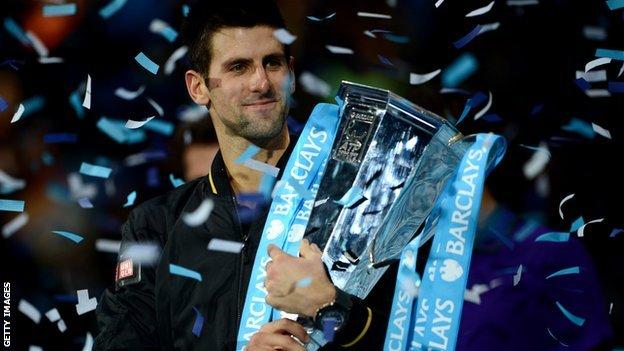 World number one Rafael Nadal will take on David Ferrer, Tomas Berdych and Stanislas Wawrinka in Group A.

Berdych and Wawrinka will open play at the O2 Arena on Monday, followed by Del Potro against Gasquet.

Djokovic beat Federer at the Paris Masters on Saturday and the timing of that tournament, where Ferrer upset Nadal in the other semi-final, made it unrealistic to schedule those players in London on Monday.

It is only the second time that the ATP showpiece has immediately followed Paris, and from next year a week's gap will be restored in the tennis calendar.

The issue has been highlighted this week as all eight London finalists reached the quarter-finals in Paris, leaving preparation time squeezed.

Del Potro had an especially testing time crossing the channel as he was the victim of a robbery at Gare du Nord station in the French capital on Saturday.

The Argentine, 25, was asked for an autograph and turned around to find his suitcase, including his passport and documentation, had been stolen, along with more personal items.

"Personal things - my rosary that the Pope blessed for me in Rome, that's important," he said. "The other things don't matter. It's over and I'm safe."

Del Potro then learned who he will be facing at the O2 next week, and said: "It's a tough draw. All the names are big.

"I will have three finals for sure, and maybe the other guys are the favourite against me. In this tournament every player can beat anyone and I have to be ready for that."

Switzerland's Wawrinka was the first man to arrive at the O2 after losing to Djokovic in Paris on Friday.

Asked about being drawn with Nadal, against whom he has a 0-11 record, Wawrinka said: "It's the top eight so it can only be tough but Ferrer and Berdych, I already beat them.

"Rafa is a different story but I'm quite excited to start the tournament. It's the best atmosphere, I think.

"[The other players] all say it's amazing to walk on the court, every match is sold out and it's a really different tournament."