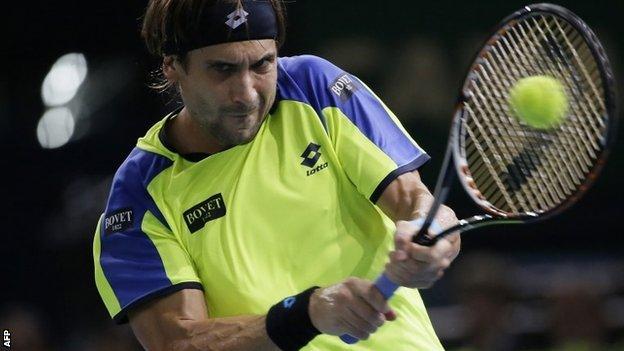 Defending champion David Ferrer defeated world number one Rafael Nadal to set up a final meeting with Novak Djokovic at the Paris Masters.

The world number four beat beat his Spanish rival 6-3 7-5 for the first win in 10 meetings.

Ferrer was broken when he served for the match for the first time, but he battled hard and made no mistake when he was given a second chance.

Nadal was bidding to become the first player since Andre Agassi in 1999 to win both the French Open and Paris Masters in the same season, but again came up short at a tournament in which he last played in 2009.

He hit an uncharacteristic 25 unforced errors and converted only one break point in seven attempts.

Ferrer got a key break to go 6-5 up in the second set before serving out for the match.

In the first semi-final, Djokovic extended his winning streak to 16 matches as he came back from a set down to defeat Federer and keep his hopes of reclaiming the number one spot from Nadal firmly on track.

Federer, who is now sixth in the world rankings, made an aggressive start and broke his opponent's serve in the third game of the match, with his net play and sharp groundstrokes causing Djokovic problems.

The Swiss looked set to qualify for his first Masters Series final of the year when he broke Djokovic again in the opening game of the second set, only to see his Serb opponent strike back to level at 1-1.

Federer lost the initiative as errors started to creep into his game and he also struggled with his serve. The Serb broke Federer's serve a second time to lead 4-2, held on to force a decider and Djokovic maintained his momentum into the third set to book his place in the final.

"Every time we play it's a great match, challenging and intense," said Djokovic.

"He was better than me in the first set and it wasn't easy. I just had to stay confident and focussed and wait for my chances. I was serving well and just kept patient and in the end it paid off."