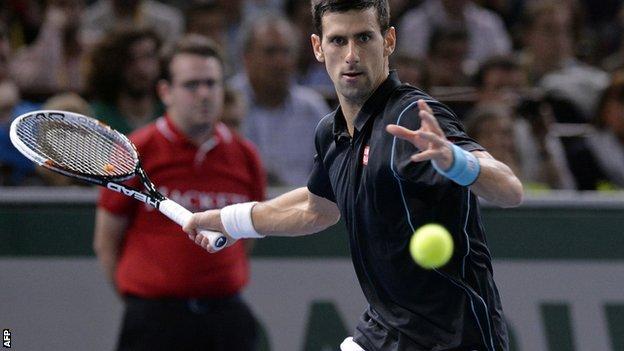 Novak Djokovic beat defending champion David Ferrer in straight sets to win the Paris Masters for the second time in his career.

Ferrer served for both sets at 5-4 but the Serb fought back in each to win his sixth title of 2013.

Djokovic won in one hour and 52 minutes, and now moves to London to defend his ATP World Tour Finals crown.

The 26-year-old's victory was his 17th consecutive win since losing the US Open final to Rafael Nadal in September, and gave him his 40th career title.

Ferrer broke Djokovic's serve in the fifth game of the first set thanks to an audacious drop shot, but the Spaniard could not hold on to his own service at the crucial moment, with Djokovic levelling at 5-5 with a forehand winner down the line.

Six-time Grand Slam winner Djokovic lost his serve in the first game of the second set, but when Ferrer was serving at 5-4 with the chance to level the match, the world number three netted with the game poised at 30-30 to allow his opponent to break back.

The Serb ruthlessly exploited the chance Ferrer had presented him to quickly secure the set and with it the victory.

Djokovic's quest to usurp Nadal in the world number one slot, which the Spaniard has held since early October, will continue at the ATP World Tour Finals, which begin at London's 02 Arena on Monday.

"It doesn't just depend on me, it depends on Rafa," said the Australian Open champion.

"It's very important for me to concentrate on myself and let things take care of themselves. I've taken a lot of confidence from this week."