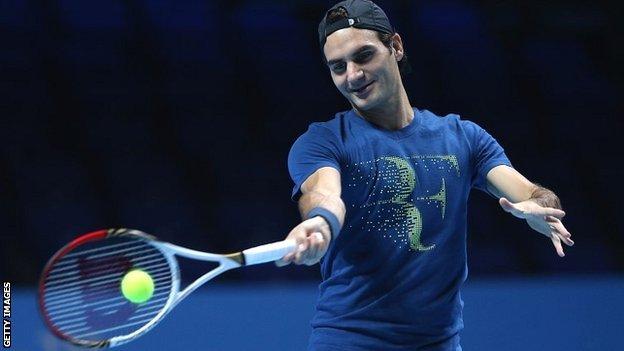 This is the first time since 2002 that Roger Federer will fail to finish the year as a member of the world's top four.

But as he prepares for a 12th consecutive appearance at the ATP World Tour Finals, he says he is "physically fine" and "mentally at peace" and is confident he can return to the Grand Slam winners' circle next year.

"The French Open is always going to be hard as long as Rafa Nadal is around," says the 32-year-old Swiss. "But on the other surfaces, if I am playing well, it's more in my racquet than in anybody else's racquet."

An end-of-season flourish on the quicker indoor courts of Basel and Paris has given the 17-time Grand Slam champion real hope after a year in which he has resembled a tribute band hitting all the wrong notes.

A second-round defeat by Sergiy Stakhovsky at Wimbledon was followed by a fourth-round exit to Tommy Robredo at the US Open. Federer admits he was not sufficiently prepared in New York after back problems which began in Indian Wells in March and "were worse than many thought they were".

He says, though, that he is back in shape, and so can let his mind focus on the opponent rather than the limitations of his back. The ageing process, Federer argues, cannot be held liable for a below-par year.

"I disagree with it because last year I was world number one at some point, and I was 31. So at 32 you can't play tennis any more? I just don't believe in that quick a turnaround," he adds.

He played a full schedule in 2012, including the Olympics, and then felt the need to spend seven weeks away from the tour in March and April of this year.

"Putting those things together it's actually very clear where the struggles are coming from," he explains. "It's important not to overreact or to panic. I had to rebound on many occasions, which I think personally I did, but it didn't reflect yet in the results."

So could Federer reclaim his place in the top four in 2014? He is certainly open-minded enough to try anything he thinks might help - whether that is experimenting with a larger racquet or giving his clay-court shoes another airing after Wimbledon.

When you are number two after Roger, it is OK

"I'm a very open person and I like to be criticised by my coaches. That's what I expect from them - I don't want them to be saying 'yes' to me all the time and agreeing with everything I say. I want them to challenge me and tell me the truth, otherwise what is the point of hiring somebody?"

As the World Tour Finals begin on Monday, could one of the other players on show replace Spain's David Ferrer, who has become Federer's (rather reluctant) understudy in the top four?

"It's really, really tough to be in the top eight," says Stanislas Wawrinka. But at 28, he might just be coming into his prime. He has the shrewd Magnus Norman as his coach, and burgeoning self-confidence after a run to the semi-finals of the US Open.

"When I'm on the court I really feel that I can beat almost all the players," he tells me. "I trust myself, I trust my game - I know that I have the level to beat those players."

As Wawrinka prepares for winter training close to his family in Switzerland, Tomas Berdych has promised to add some more small pieces to the "really big puzzle" that is tennis. He spent a month at number five this year, but has not yet won a tournament in 2013, so must be considered a long shot to break into the top four.

Richard Gasquet says self-deprecatingly: "I'm not two metres tall, I'm not very muscular, so I'm trying the best I can with my shots."

That leaves Juan Martin Del Potro as the most likely. The Argentine is a former US Open champion, the winner of three tournaments in the past three months, and at 25, the youngest of the top 10 by 18 months.

But if the wannabes are eventually frustrated by the return of an iconic lead singer, Federer's fellow Swiss Wawrinka does not think they should despair.

"For me he is the best player ever in the world, and I'm not trying to compare to him. When you are number two after Roger, it is OK."