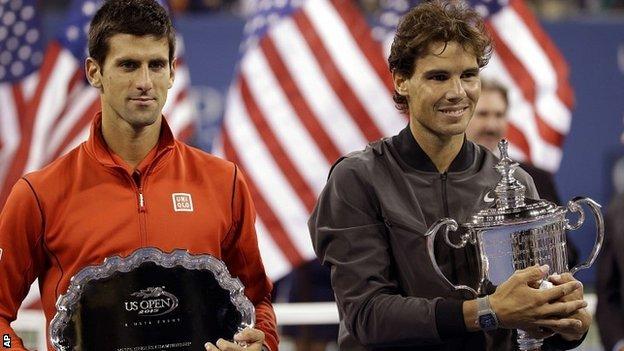 Rafael Nadal and Novak Djokovic will vie for the year-end number one ranking as London hosts the ATP World Tour Finals for the fifth time.

Djokovic kept up his slim hopes of overtaking Nadal by winning the Paris Masters on Sunday.

The world's top two will begin their campaigns at the O2 Arena on Tuesday.

Andy Murray, Britain's first Wimbledon men's singles champion for 77 years, misses the tournament as he recovers from back surgery.

Who are the contenders?

The tournament sees the world's top eight players split into two groups, with the top two from each progressing to the semi-finals.

After winning the French and US Open titles since returning from injury in February, Nadal will clinch the year-end number one ranking if he wins two matches in London.

The task facing Djokovic would remain considerable even if the Spaniard fails, as he would need to win the title in London and go unbeaten in the Davis Cup final later this month.

"It doesn't just depend on me, it depends on Rafa," said the Serb.

"It's very important for me to concentrate on myself and let things take care of themselves. I've taken a lot of confidence from this week [in Paris]."

Despite Murray's absence, tournament organisers say ticket sales for the two daily sessions at the 17,800-capacity arena have matched those of previous years, with the likes of Nadal, Djokovic and Federer proving a huge draw in autumnal London.

Federer is ranked seventh in the world after a disappointing year, but says he is now over the back problems that hindered him and that his confidence is returning as he targets a seventh win in the ATP showpiece.

Having only confirmed his involvement last week, the 32-year-old Swiss said he understood why his face is not adorning all the pre-tournament publicity as in previous years.

"I saw taxis and stuff with my face on it," he said. "The ATP tries to manage it as much as they can and eventually they have to take a decision who they're going to use more, or not.

"It's important that they use the guys who will definitely be here and I was on the brink of not making it, so I understand if I'm not everywhere this year like maybe in previous years."

Whether any of the five remaining finalists can challenge for the title is open to question, with the first day likely to give a strong indication of the main contenders.

Czech number one Berdych and Switzerland's Wawrinka, both 28, have reached career-high rankings in 2013 but with losing records against Nadal and Ferrer, neither can afford a poor start to Group A on Monday.

Argentina's Del Potro, 25, returns to a city where he has enjoyed notable success, both at the O2 Arena and at Wimbledon, while Frenchman Gasquet, 27, last made the finals six years ago in Shanghai and has worked hard in recent weeks to secure his return.

The top eight doubles teams in the world will also be in action, although there will be no Britons despite encouraging seasons for Jamie Murray, Dom Inglot, Colin Fleming and Jonny Marray.