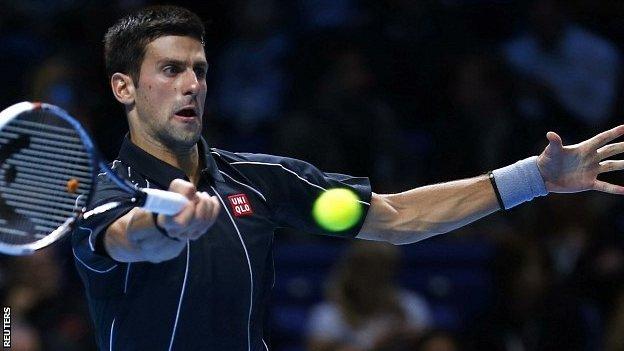 The Serb joined world number one Rafael Nadal in the semi-finals with a 6-3 3-6 6-3 victory in London.

It was a 19th consecutive win for Djokovic since losing to Nadal in the US Open final in September.

Del Potro and Roger Federer will battle for the second Group B qualification place on Saturday.

"I will try to do my best," said Del Potro. "I know for me it has been a long season, a lot of matches in the end of the year. I'm getting tired.

Djokovic, who won in France last weekend and overcame Federer in his opening match in London, was pleased to come through another tough examination.

"I have to say, considering the scheduling on back to back Bercy and World Tour Finals, I had luck that my group was selected to play Tuesday, Thursday," said Djokovic.

"I overcame the two big fights against Roger and against Juan Martin today. Both matches went the distance; both matches were decided in a few points. So I'm just very glad to be able to play my best when it's needed.

"I did qualify for semi-finals, which is definitely a positive news, but I still want to try to win the last match of the group."

A full house of more than 17,000 spectators packed into the O2 Arena to see a repeat of this year's gripping Wimbledon semi-final, which Djokovic won in five sets.

And with Del Potro on a run of 16 wins in 18 matches since the US Open, Thursday's night session pitched the two most in-form men on tour against one another.

Both men knew that a straight-sets win would be good enough for a semi-final spot, with any score enough for Djokovic.

The world number two, 26, made an error-strewn start, surviving two break points in the opening game, but then began to find his range.

After pushing hard for the breakthrough in game four, he grabbed the initiative two games later.

Unerring accuracy and depth kept Del Potro constantly on the move and the Argentine eventually flailed at a forehand, before Djokovic rubbed salt in the wound by closing out the set with a second-serve ace.

Del Potro, 25, might have spent much of the first set breathlessly chasing from side to side, but some solid serving got him back into the contest early in the second.

The Argentine fans in the arena raised the volume another notch when their man finally got the break at 3-2, thanks to a net cord that was too deadly for even Djokovic to run down.

Del Potro withstood some pressure on serve to level at one set all after 75 minutes, and the destiny of Group B remained wide open.

It was Del Potro who threatened first at 1-1 in the decider but he missed with an attempted forehand pass, and just about held himself back from taking it out on his racquet.

The miss proved costly when Djokovic showed a more ruthless streak at 3-2, this time getting the benefit of a net cord on his way to the break, and three straight games took him to the brink of victory.

Djokovic played a nerveless final service game that included one sublime drop volley and finished with a clean backhand winner to remain on course for a third season-ending title.