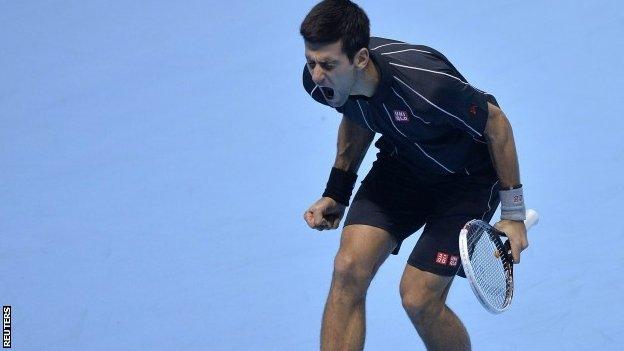 Novak Djokovic beat Stanislas Wawrinka at the World Tour Finals to take his winning run to 21 matches and set up a final against Rafael Nadal.

Djokovic did not hit a winner until the final game of the opening set but he was in top form by the closing stages.

The Serb will play Nadal for the title on Monday as the world's top two meet for the sixth time in 2013.

"It's going to be a great final," said Djokovic. "I hope all the crowd will enjoy it because we definitely do on the court.

"It's always a thrilling competition between me and Rafa. Let's say we know each other quite well. There'll be no secret between us on the court."

Nadal earlier beat Roger Federer 7-5 6-3 to close in on the one significant prize he has yet to win.

The Spaniard will face a tough task against the in-form Djokovic, who has not lost since his US Open final defeat by Nadal in September and has dominated the indoor season.

Djokovic went into Sunday's match at the O2 having not lost to Wawrinka since 2006, although he started slowly and fatigue looked as though it might be factor after back-to-back weeks in Paris and London.

A stunning cross-court backhand winner helped Wawrinka to break in game three, but the seventh seed could not back it up and framed a forehand to make it 2-2.

Djokovic, 26, was playing well within himself but his accuracy was in marked contrast to the blizzard of winners and errors coming at him.

Wawrinka saved another break point in a pulsating 24-stroke rally in game eight, but then slapped a regulation forehand into the net to fall 5-3 behind.

That was a real masterclass from Djokovic. Staggering, outstanding tennis. It's a privilege to watch a genius out on the court.

Stan's had an amazing week, but you can see why Novak's had such a great year.

Djokovic finally hit his first winner of the night with a sweeping drive volley and then saw off a third Wawrinka break point of the set with a heavy serve, before firing down another to seal the set.

With two wins in their 16 previous matches, it was no surprise that Wawrinka did not exactly exude belief as the second set began.

There was a sense of inevitability when the Swiss pulled a backhand wide to drop serve straight away and lose a fifth game in succession.

Djokovic's return is arguably the best in the game and Wawrinka simply was not making enough first serves to keep an increasingly dominant opponent at bay.

One outrageous forehand pass on the stretch summed up Djokovic's appetite for the contest, and the champion took apart the Wawrinka service game one final time to wrap up victory.

"I had the feeling that I was playing good, hitting well the ball," said Wawrinka. "But I think I don't have enough energy today. Against him, that makes a big difference.

"I'm disappointed with myself because I had the feeling that I could have done something better, but I really think that today I was not fresh enough to do something."

Djokovic added: "I hope that I can carry today's performance into Monday's match because this was the best match I had so far this week. I felt great on the court."