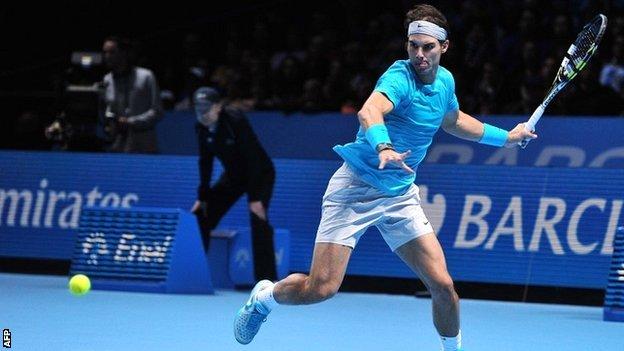 The BBC will continue broadcasting the Barclays ATP World Tour Finals from the O2 in London in 2014 and 2015 after extending its contract with the ATP.

The deal gives non-exclusive television and full radio commentary rights, with eight singles matches on television, including a semi-final and the final.

The ATP World Tour Finals have been on the BBC since moving to London in 2009.

The 2013 final, featuring world number one Rafael Nadal and number two Novak Djokovic, will be shown live on BBC Three from 19:30 GMT on Monday.

The tournament, held annually since 1970, is the climax to the men's professional season, with the top eight singles players and doubles teams competing for the last titles of the season.

BBC Director of Sport Barbara Slater said: "We are delighted to extend our deal with the ATP's season-ending event, ensuring that we can continue to bring audiences to this first class tennis tournament on the BBC through to 2015.

"The ATP's season finale remains a highly anticipated must-watch event where the very best in the world battle it out in a unique atmosphere and in front of sell-out crowds. Bringing this, the pinnacle of the men's tour, to our audience, is evidence of our commitment to providing key live sporting moments to the nation on free-to-air television."

Chris Kermode, managing director of the ATP World Tour Finals, added: "The BBC has provided a fantastic platform for our season-ending event on terrestrial television since 2009, and we're very happy to extend our agreement a further two years.

"This agreement is great news for the Barclays ATP World Tour Finals and for tennis fans in the UK as we look to continue to grow the tournament with every year."