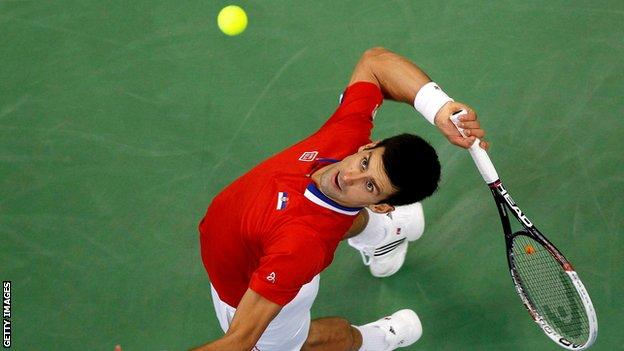 Novak Djokovic and Tomas Berdych both won to leave the Davis Cup final between Serbia and Czech Republic level at 1-1 after the first day.

Djokovic, the world number two, saw off Radek Stepanek 7-5 6-1 6-4 to give home team Serbia the advantage in Belgrade.

"The first set was very close but after that I felt better on the court," Djokovic said.

The final, which is the best of five matches, runs until Sunday.

Serbia's Ilija Bozoljac and Nenad Zimonjic will face Czech pair Jan Hajek and Lukas Rosol in the doubles on Saturday.

Djokovic will take on Berdych in the first of Sunday's two singles matches, with Lajovic facing Stepanek.

Fresh from beating world number one Rafael Nadal to win the ATP World Tour Finals in London, Djokovic made an aggressive start.

Stepanek was broken in the sixth game and - despite breaking back - then lost his serve again as the Serb took 56 minutes to win the opening set.

Djokovic raced through the second set, and wore down his Czech opponent's resistance in the third, closing out victory in two hours and nine minutes.

Berdych then secured an expected straight-sets win over Lajovic, ranked 117th in the world and stepping up for Serbia after Janko Tipsarevic pulled out with an injury.

The 2010 Wimbledon finalist had a few nervous moments, finding himself 0-30 down on serve five times, but did not have to face any break points as he came through to win in one hour and 56 minutes.