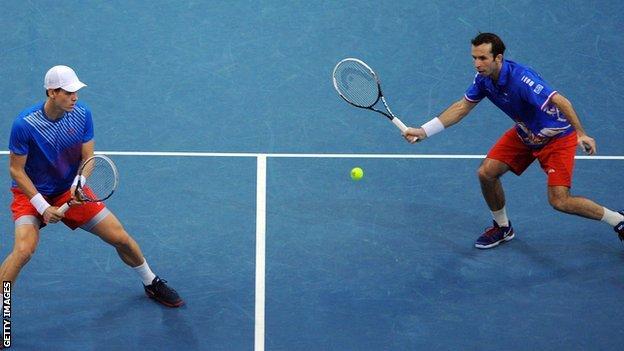 Tomas Berdych and Radek Stepanek secured doubles victory over Serbia's Ilija Bozoljac and Nenad Zimonjic to take the Czech Republic to within one rubber of retaining the Davis Cup.

They have now lost just once in 15 matches as a doubles pairing.

With Serb Djokovic and Czech Stepanek strong favourites on Sunday, the doubles rubber was widely regarded as pivotal.

But despite the significance of the rubber, Serbia's captain Bogdan Obradovic resisted the temptation to use Djokovic, who secured his 23rd successive victory when he won in the singles on Friday.

The Czechs, buoyed by a strong travelling support in the Belgrade Arena, changed their initial pairing of Jan Hajek and Lukas Rosol, opting instead for 34-year-old Stepanek alongside the younger Berdych, the current world number seven.

Before play began, tribute was paid to Zimonjic for his 19 years of service to Serbia in the Davis Cup, but the 37-year-old got no special treatment from his opponents when his serve was broken in the opening game.

Berdych and Stepanek, who paired up successfully when the Czechs beat Spain to claim last year's Davis Cup, volleyed consistently and broke again before serving out to take a one-set lead in just 30 minutes.

They kept up their momentum with another break of the big-serving Zimonjic in the first game of the second set and, while the Serbs offered more resistance, Berdych served out flawlessly for a 6-4 set win.

A deft Stepanek volley denied the Serb duo on their first break-point of the match in the third set, as the Czech serve continued to look solid.

The world number 44 then placed two perfect volleys to create a two-point cushion in the third set tie-break, before hammering a serve down the middle to close out a vital win.