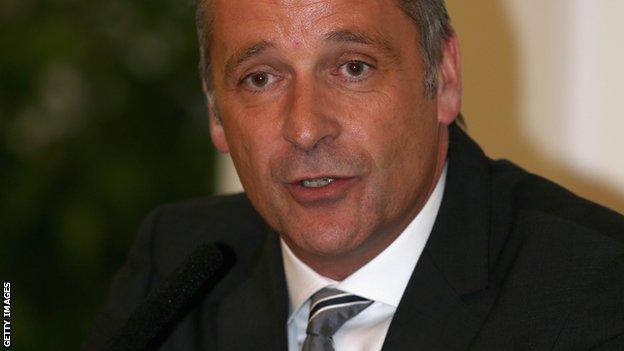 Briton Chris Kermode is the new head of men's professional tennis after being appointed executive chairman and president of the ATP.

Kermode, 48, was tournament director of the ATP World Tour Finals and the Aegon Championships at Queen's Club.

Backed by Andy Murray, he was the unanimous choice of the ATP board.

Who is Chris Kermode?

Post-playing: Worked as a tennis coach before going on to work in the music and film industries

"It's a huge honour to lead the ATP in what is unquestionably one of the most exciting periods in the history of men's professional tennis," he said.

"I look forward to getting started in my new role and to working very hard together with ATP staff, players, tournaments and partners as we look to harness the full potential of our great sport in years to come."

Kermode starts his three-year term at the helm of the ATP, which is responsible for organising top-level men's tennis, on 1 January.

"I've known and worked with Chris for many years and he gets on well with the players," said Wimbledon champion Murray, 26.

"He's done a great job with Queen's and the World Tour Finals and I look forward to working with him in his new role."

Seventeen-time Grand Slam winner Roger Federer, who is also the president of the ATP Player Council, said he was "delighted" to welcome Kermode into his new role on behalf of the players.

"Chris has a lot of experience having worked in a number of different capacities in tennis over the years and he has all the attributes required to lead the ATP World Tour forward during this period of unprecedented popularity and success," said the Swiss star, 32.