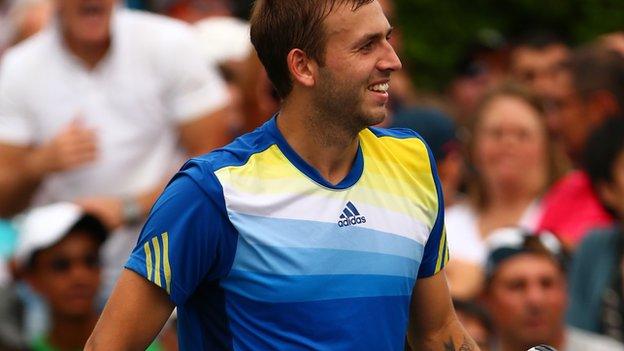 British number two Dan Evans is confident he can reach a second straight Grand Slam after a fine start at the Australian Open qualifying.

Evans beat Liang-Chi Huang of Taiwan 6-1 6-2 in the first round of qualifying in Melbourne, and will next play Hungary's Marton Fucsovics.

"I'm pretty confident I'll come through but quite a lot can happen through the next two matches," Evans told BBC Sport.

"I had a good pre-season so I feel as good as anyone in the tournament, I'm sure."

Evans played in the main draw of a Grand Slam for the first time outside of Wimbledon when he qualified for the US Open in August, and the 23-year-old from Solihull in the West Midlands is determined to repeat the performance.

I won that first match pretty comfortably, played well, and if I keep playing like that I should put myself in some good positions in the matches to come to get through

After saving four break points in the opening game against Huang, the Briton - ranked 115 places higher at 149 in the world - played some high-quality attacking tennis to win in 61 minutes.

"I need to come through [qualifying] again," said Evans. "I won that first match pretty comfortably, played well, and if I keep playing like that I should put myself in some good positions in the matches to come to get through.

"Obviously [qualifying at the US Open] gives you more confidence, but you've still got to win the three matches.

"I was probably a bit more confident going into the US Open, I'd played a load of matches, but I've started the year pretty well and I've got a decent chance now to come through."

Evans began 2014 by qualifying for the main draw in Doha and then taking a set off world number 24 Ernests Gulbis, but he admitted he had been disappointed not to build on his success in New York in the final months of 2013.

"I was pretty tired, I didn't take any sort of rest," he said.

"I played Davis Cup, which couldn't be helped, and then I should have probably taken two or three weeks off, maybe practised for two and gone to Seoul, but I went to America and it just snowballed from there, me and the schedule."

Andy Murray and Laura Robson qualify directly, with the draw scheduled for Friday and the tournament proper getting under way on Monday.

Robson was able to practise in Melbourne on Wednesday despite pulling out of her previous match in Hobart with a wrist injury on Monday.