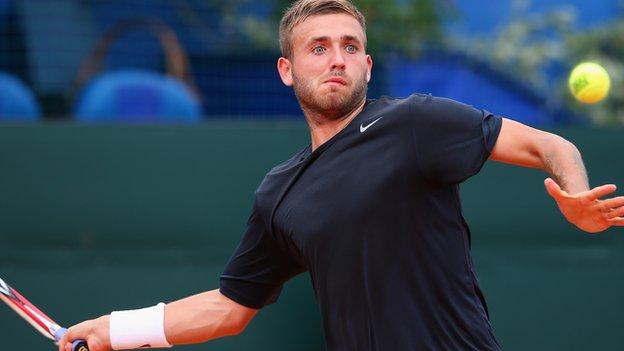 Dan Evans saw his hopes of qualifying for a second successive Grand Slam tournament end with defeat by Marton Fucsovics at the Australian Open.

Evans went down 6-4 6-1 to the Hungarian in just 59 minutes in the second round of qualifying.

Heather Watson and Johanna Konta won their first-round qualifying matches as the women's draw got under way at Melbourne Park.

Evans had been confident of matching his run into the main draw of the US Open last August, but came up against a man in form.

Fucsovics, the junior Wimbledon champion in 2010, looked solid on serve as he moved into a 5-4 lead and the pressure told on Evans, who gave up the set with a poor game that included two double faults.

The British number two was broken early in the second set and warned for an audible obscenity, before throwing his racquet in frustration when three break-back points went begging in game three.

They proved to be his only opportunities of the match as Fucsovics accelerated towards the finish line, leaving a disappointed Evans to make a quick exit from Court Eight.

Wimbledon champion Andy Murray will be the only British man involved when the draw takes place at 23:30 GMT on Thursday.

Watson had earlier continued her encouraging start to 2014 with a straightforward 6-4 6-3 win over Australia's Arina Rodionova.

After dropping serve early on, the 21-year-old Briton got back on level terms in game six and then took control of proceedings on Court Three.

"I was just really nervous - I don't know why I was so nervous today," said Watson, who will face 32-year-old Frenchwoman Stephanie Foretz Gacon in round two.

"It's a while since I played in qualifiers and I expect myself to do well and go far.

"I really like the tournament here and play well on these courts. I was putting too much pressure on myself, that's why I was a bit nervous, but I'm happy I got through it. I'll sleep better tonight and play better tomorrow."

Watson reached the third round of the main draw in 2013 and was ranked as high as 39 in the world last February, but she is currently at 120 after a difficult 2013 that was blighted by a bout of glandular fever.

She has begun 2014 with a new coach in Argentine Diego Veronelli and in good form, having already come through qualifying in Brisbane.

"Before this tournament I had six singles matches and that's what I wanted before the Australian Open, so I'm pleased with my year so far," she added.

"It's going very well with Diego. I've learned a lot already, we're adding different things to my game and most importantly we're getting on very well."

Konta, 22, has overtaken Watson in the rankings and the British number two showed why she is seeded third in qualifying with a crushing 6-2 6-1 win over American Grace Min in 54 minutes on Court Six.

British Fed Cup team-mate Moore could not record a first ever win Grand Slam qualifying after a poor start against Sema in the opening match on Court 15.