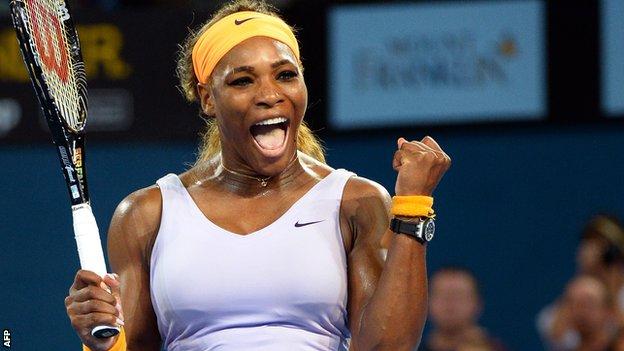 Serena Williams can become the first woman since 1988 to win all four Grand Slam titles in the same year, her coach Patrick Mouratoglou believes.

He says it would be an "exceptional" achievement, but told BBC Sport: "With Serena, everything is possible."

Speaking on the eve of the draw for the first Grand Slam of the season in Melbourne, he added: "Look at the level she plays at at the moment.

"She's beaten all the top players many times, so you can aim that high."

Williams, 32, held all four Grand Slams simultaneously when she won the Australian Open of 2003, but Steffi Graf in 1988 was the last female player to lift all four titles in the same calendar year.

"Of course it would be exceptional because it's crazy to do that," added the Frenchman. "It's happened just a few times in the history of tennis - but she can do it and the goal is to do the best possible in all four Grand Slams. So why not?"

Last year, the world number one won the French Open and the US Open, but was hindered by an ankle injury when she lost to Sloane Stephens in Melbourne and, according to Mouratoglou, was feeling the effects of a 34-match winning run when she lost to Sabine Lisicki in the fourth round of Wimbledon.

He believes there is room for improvement, and describes 2013 - in which Williams lost only four matches - as a "transitional year" where she increased her schedule to develop greater consistency.

The American expects to play the same number of tournaments in 2014, and has already won a title in Brisbane without dropping a set after beating both Maria Sharapova and Victoria Azarenka.