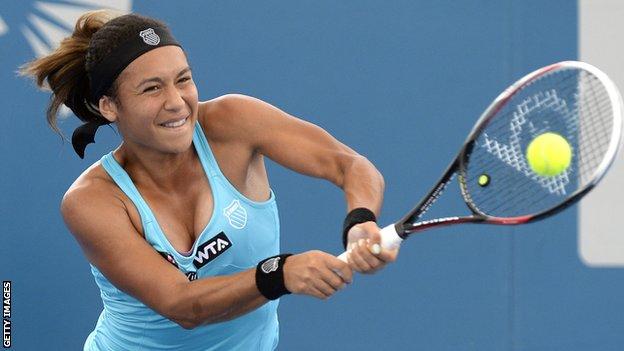 Heather Watson made swift progress into the third and final round of qualifying at the Australian Open.

Watson will play American Irina Falconi on Saturday for a place in the main draw.

However, Johanna Konta, the British number two, is out after losing 6-1 6-2 to Ukraine's Olga Savchuk.

Watson, 21, is seeded seventh in qualifying and had won her last two matches against Foretz Gacon.

There was no sign of the nerves that Watson admitted hampered her in round one and, hitting the ball cleanly in a tricky wind on Court Six, the Guernsey player rolled through the first set in 21 minutes.

Foretz Gacon took a medical timeout for treatment on her shoulder, but it made little difference as Watson kept up the pressure on the resumption, and it was no surprise when the 32-year-old called it quits after eight games.

"It's tough, it happens, but I was proud of how I played today and it's good preparation for tomorrow," Watson told BBC Sport.

"That's how I want to play. I came in with a different approach today. It was nice to get through the first match but now I'm feeling better I want to hit the shots that I've been practising - I want to hit them in the match too and I was just very pleased with how I was playing."

Falconi, 23, is likely to provide far stiffer opposition on Saturday after a 6-0 6-2 win over South African Chanel Simmonds.

"I've played her in doubles and I've practised with her a lot," added Watson. "I'm actually very good friends with her off the court.

"I know how she plays and I'm looking forward to getting out there tomorrow and playing like I did today.

"She's a smaller girl so she isn't going to overpower me, I don't think, but she's got great hands, great touch and I'm sure she'll be using that tomorrow."

Watson is currently being coached by 34-year-old Argentine Diego Veronelli, and asked about the recent spate of top men working with famous players of the past, she said: "I feel like it's kind of a fashionable thing.

"All the top players are kind of following trends but for me, right now in my career, Diego is the perfect coach and we're getting along great.

"I'm learning so much already from him. He's great support for me on and off the court and it's looking very good at the moment."

While Watson consistently peppered the baseline during her win, compatriot Konta completely failed to find her range in a disappointing defeat on Court Eight.

Seeded third in qualifying, the Briton's forehand in particular let her down and a final tally of 40 unforced errors to 13 from Savchuk described a day to forget.

Konta had a fleeting chance at 0-40 early in the second set but could not make a telling return, and after 66 minutes she fired her 17th errant forehand of the day over the baseline to end the contest.