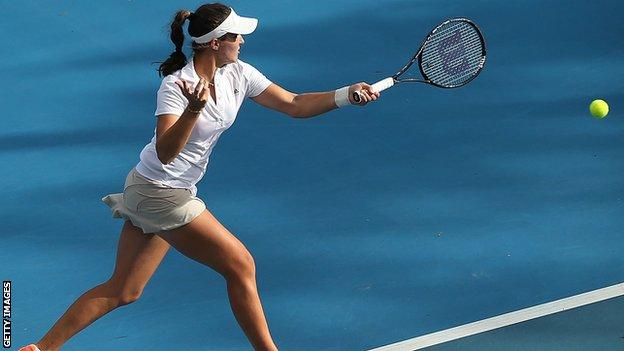 British number one Laura Robson says she feels "no pain" from a recent wrist injury and is fit to start her Australian Open campaign in Melbourne.

Robson, who turns 20 later this month, retired against Yanina Wickmayer in Hobart on Monday but has been practising here without any problems.

"It's feeling good," said the Brit. "I think day by day it's getting better."

She faces Wimbledon semi-finalist and 18th seed, Belgium's Kirsten Flipkens, in round one at 00:00 GMT on Monday.

The left-hander, ranked 46th, described the injury to her left wrist as "a bit of tendonitis and a bit of ligament issues".

"I'm hitting my forehand really well, which was the initial problem with my wrist, so I'm looking forward to Monday."

Robson pulled out of her first scheduled tournament of the season in Auckland as she waited for the injury to heal.

She added: "I felt it near the end of the off-season, around the middle of December, and saw a doctor in Miami and it just didn't quite heal like it was supposed to, but it's all good now.

"No pain and I'm just really looking forward to playing Flipkens on Monday. It's going to be a tough one and she's a really tricky player."

Robson was hampered during the build-up to last year's US Open with an injury to her right wrist, but she is not concerned about a lack of match practice heading into Melbourne.

"I always love playing at Grand Slams," she said.

"It's going to be a tough one because I haven't had that much match practice this year, but I'm not worried.

"I've played points in practice and I managed to get a set-and-a-half in last week in Hobart, so that's not a big concern for me."

The former Wimbledon junior champion reached the third round at Melbourne Park last year, beating eighth seed Petra Kvitova in one of her biggest victories to date.