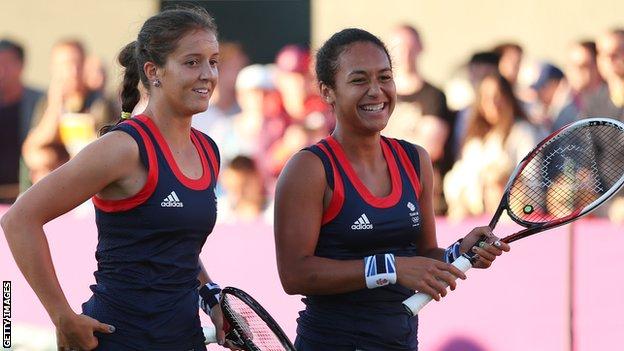 Britons Laura Robson and Heather Watson will both feature among the opening matches as the Australian Open gets under way on Monday.

The pair's first-round matches have been scheduled at 00:00 GMT, with both facing higher-ranked opposition.

Wimbledon champion Andy Murray begins his campaign against Japan's Go Soeda on Tuesday, with their match scheduled not before 06:00 GMT on Hisense Arena.

The rankings would suggest Murray will be the lone Britain remaining in singles by then, but both Robson and Watson have reason to believe they can cause upsets.

Robson, who turns 20 later this month, has a history of raising her game against the leading players, and beat eighth seed Petra Kvitova on her way to round three last year.

The start of her 2014 season was interrupted by an injury to her left wrist, but she said on Saturday that she is feeling no pain and is relishing the prospect of facing Flipkens for the first time.

Asked whether the injury meant she had lowered her expectations for Melbourne, Robson said: "I don't think so.

"I'm not someone who needs a load of practice to be able to play well.

"I've always been quite naturally good at hitting and I'm happy with how I'm playing right now."

Asked about Flipkens, the Briton added: "She's a tricky player. She plays a lot of slices, comes in, and it should be interesting."

Watson, 21, is in high spirits after battling through three rounds of qualifying.

The Guernsey player has enjoyed a positive start to 2014 as she looks to climb back up the rankings following the slide prompted by a bout of glandular fever early last year.

Hantuchova will pose a serious test of Watson's newly restored confidence when they meet for the first time, but the 30-year-old Slovakian lost in the first round in three of the four Grand Slams last year, and can be vulnerable.

Watson has significant points to defend having reached the third round last year, and she is determined to do everything she can to get back up the rankings quickly.

"That's why I'm so motivated and taking every match so seriously - because I've been there and know I can get there, and I can't wait to get back."