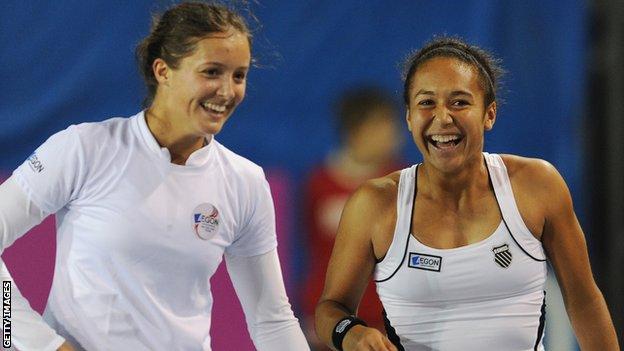 Britons Laura Robson and Heather Watson will simultaneously tackle two seeds on the opening day of the Australian Open. Both have new coaches, and a sense of optimism you detect in many players at the dawning of a new year.

Robson plays the 18th seed Kirsten Flipkens, who made a run to the Wimbledon semi-finals last year, while Watson is up against Daniela Hantuchova: the 31st seed, and a former member of the world's top five.

I feel great, I feel happy, I am enjoying the game, I want it and I'm getting the butterflies before the match

For the second Grand Slam in a row, Robson's preparations have been hindered by a wrist injury. The right one let her down at the US Open in New York, while tendinitis and a minor ligament strain in her left wrist mean she is yet to complete a match this season.

She withdrew from the ASB Classic in Auckland and then pulled out of her first match in Hobart early in the second set last week.

She has, though, been playing full points in practice since Friday, and on the evidence of her workouts in Melbourne, the forehand that had been causing her discomfort is in good working order once more.

Putting her through her paces on a cloudy and cool Saturday morning on Melbourne Park's court 19 were her new fitness coach Mark Wellington, who has worked with a number of Grand Slam champions, and assistant coach and hitting partner Jesse Witten.

The barrel-chested 31-year-old American peaked at 163 in the world four years ago and still has an ATP ranking having played several Challenger and Future events last year.

Witten will travel with Robson on a regular basis. They share a love of American sport (Robson was delighted when her NFL team the Carolina Panthers recently beat Witten's Miami Dolphins), and she credits him with a good tactical brain.

But the head of the Brains Trust is Nick Saviano: a very experienced coach who has been fine tuning the British number one's backhand and serve at his academy in Florida during the off-season.

Saviano prefers not to travel too much, but he will be at all the Grand Slams with Robson's close friend Eugenie Bouchard, 19, who is seeded here for the first time.

Whether having to play second fiddle to another of the most promising teenagers in the world will ultimately hold Robson back, remains to be seen. The 19-year-old seems content for now.

"Primarily he's with Genie here, and I'm with Jesse, but I can call Nick up and discuss things whenever necessary - so I'm happy with how things are going to be at this tournament," she said.

Watson's new coach is Diego Veronelli - a tall and approachable floppy haired 34-year-old from Buenos Aires, who made it into the world's top 200. He admitted that Watson's scrappy and nerve-shredding victory over Irina Falconi in the final round of qualifying took four years off his life.

A year ruined by glandular fever means the 21-year-old from Guernsey is currently ranked too low to gain direct entry into tournaments, but she has proved she has the spirit and the class to be in the main draw by coming through three rounds to qualify for the Brisbane International, and then again here.

Melbourne holds bittersweet memories for Watson: she managed to reach the third round last year despite the virus starting to rear its ugly head.

"In my first round match it was 3-2 in the first set and I was starting to cramp and starting to feel tired," she said.

"I couldn't really move any more, so I ended up just teeing off which isn't my usual game but it ended up working.

"Now I'm back to full fitness: I feel great, I feel happy, I am enjoying the game, I want it and I'm getting the butterflies before the match, so I feel like I'm back to normal now and even stronger than I was before."

After such a wretched 2013, it was wonderful to see her surrounded by cameramen, reporters and well wishers (including some friends who have made the journey from Guernsey) as she left court after securing qualification.

The draw has not been particularly kind to her, but she's fit and healthy once more, and looking forward in time to rejoining Laura Robson in the world's top 50.