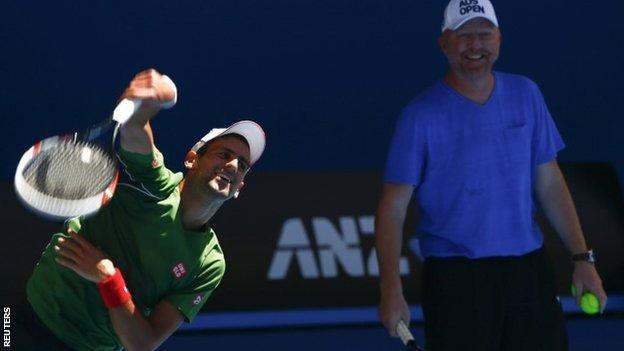 Boris Becker is doing his best to relocate his game face in the city where he first became world number one.

The German was so overwhelmed by his capturing of a fifth Grand Slam title, and with it the top ranking, at the 1991 Australian Open, that he ran straight out of the stadium and went for a lonely jog in a nearby park.

"I was thinking back about the past," he said at the time. "How many years I have been playing, that I am finally on the top.

"I was thinking backwards about what I had to go through."

There are a number of former Grand Slam winners who are coaching current players. These include:

Those experiences are presumably among the nuggets world number two Novak Djokovic is keen to mine, after the Serb's surprise decision to hire Becker as his coach.

Ivan Lendl was the beaten man in that final 23 years ago, and it is possible that he and Becker will square up once again in two weeks' time.

Djokovic says Becker's addition to his team was not inspired by Lendl's success in helping Andy Murray become a major winner, but that partnership does appear to have sparked a trend that has captivated the tennis world.

Among the cast list are Stefan Edberg, who has been brought in by Roger Federer, Michael Chang, who is working with Kei Nishikori, Goran Ivanisevic, who has joined forces with Marin Cilic, and Sergei Bruguera, who is now coaching Richard Gasquet.

"It's funny but I'm not very surprised," said Patrick Mouratoglou, a man with no stellar playing career behind him but a coaching record that boasts a bona fide all-time great in Serena Williams.

"I've known tennis for a few years now, and I know that when someone is doing something that works, everyone is copying. So two years ago everybody wanted to have this special [gluten free] diet that Novak had, because he was winning with that diet.

"Now the fashion is everybody wants to have an ex-number one with him, because Andy Murray did so well with Lendl.

"Of course I have a lot of respect for all these champions, definitely. They have great experience to share. Players just have to be careful because being a coach is a real job."

Becker has spent much of the 15 years since he retired playing poker, commentating and perfecting his role as 'Britain's best-loved German', but he has returned to tennis in some style by taking over from Djokovic's long-time coach Marian Vajda.

Martina Navratilova, an 18-time Grand Slam champion, was among many surprised that Djokovic should make such a drastic change.

"I found it peculiar for him to be fiddling with his set-up when he's done so great with Vajda," she said.

"I think he's been phenomenal for him - but sometimes if you've been with a coach for a long time you feel like you need some fresh perspective and some new ideas.

"Boris played a different game from Novak but I'm looking forward to seeing the kind of contribution he makes."

Becker insists predictions that he and Djokovic might rival Maria Sharapova's one-match relationship with Jimmy Connors last summer are wide of the mark, and that despite a lack of coaching credentials, he can make a difference.

"I've been in 10 Grand Slam finals," said the 46-year-old. "I know exactly what a player feels like when he's in the later stages of a tournament."

Comparing results between the great players who are suddenly back on the scene is probably more fun than instructive, in terms of how they will fare as coaches, but they do serve as a reminder that Becker was as much a man of steel as Lendl in his time.

The German won 10 of their 21 matches between 1985 and 1993 and, tellingly, five of their six Grand Slam encounters, including finals at Wimbledon, the US Open and Australian Open.

One of the oddities of the Djokovic-Becker partnership is that the one title the Serb covets above all others is the French Open, which is also the only major missing from Becker's CV.

But then Lendl famously never won Wimbledon and that did not stop Murray last summer.

While Becker's game, based around a huge serve and acrobatic volleying, has little in common with Djokovic's precision groundstrokes and brilliant defence, both men have six major titles to their name, at least for now, and both have at times been consumed by the ones that got away.

Djokovic was dealt a serious blow by his semi-final defeat by Rafael Nadal at last year's French Open, and the 26-year-old Serb has lost six of his 12 Grand Slam finals.

Becker was just 21 when he won his third and last Wimbledon title, and he lost more finals there than he won with four defeats - including one of the great meltdowns when he lost to compatriot Michael Stich in the 1991 final.

The question is whether any of that experience can benefit Djokovic, who has won the last three Australian Opens and is on a 24-match winning streak.

"I have the utmost respect for what he has achieved in his career," explained Djokovic.

"He had the great serve. Obviously at the time the construction of the point was different, everything was faster, players served and volleyed many times.

"But tennis has evolved in a way because of the technology. Now the game is based on the baseline, longer rallies and so forth.

"I believe with his great volleys and that aggressive kind of mindset, he can help me."

These new all-star teams appear to be based around intangibles as much as technique and tactics; the right word or two just before a Grand Slam final from one of the few people in the world to have experienced it themselves.

"In any relationship the chemistry is important," Lendl said last week. "Your best coach at an academy may not be the right person to work with your best kid, but you put them with someone less good and they do a great job.

"If a guy with 30 majors comes in and the chemistry is not there, it's not going to work."

Federer talked glowingly about Edberg on Saturday and their chemistry is evidently very much there, but their working relationship is barely even a work in progress at this stage, with the Swede only flying into Melbourne on the eve of the tournament.

"We'll see how it goes really," said 32-year-old Federer. "For all of us to find out how it's going to be, how he wants it to be, how I want it to be. We'll talk about it hopefully as the tournament goes along.

"If it doesn't work, we'll go back to practice maybe, do something different, and you figure things out on the practice courts again."

While Edberg is only pencilled in for 10 weeks with Federer at this stage, Becker has an official title of 'head coach' and will travel with Djokovic to all the Grand Slams and eight other events throughout the year.

"It may be risky to be coached 100% by someone, whoever this ex-player is," said Mouratoglou.

"It can work perfectly, like it did for Andy; it can also be a big failure, like it happened with a few others in the past that we won't name.

"So for me it's risky, but if you manage to keep your regular coach and have this ex-number one as a consultant, it's a good combo."

Whatever the risks, one thing for certain is that it will not just be the players looking to the stands in the weeks and months to come, with cameras sure to be trained on the player boxes like never before.

Murray summed up the mood when he echoed the widespread excitement at seeing such great names back in the game, while hinting that some old fires might still be smouldering.

"It's good to have all of them around," said the Wimbledon champion.

"I know a lot of players back in the day didn't get on that well with each other. There might be a few interesting dynamics going on there with them."