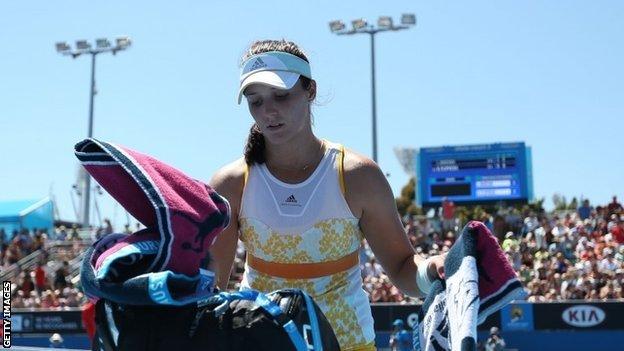 Laura Robson and Heather Watson were beaten as British interest in the women's singles ended swiftly at the Australian Open.

Both players took on higher-ranked opposition in the first round, but the manner of their defeats differed sharply.

Robson spent just 50 minutes on court in a 6-3 6-0 thrashing by 18th seed Kirsten Flipkens - the Briton's first full match of the season following a wrist injury.

This was a hugely dispiriting defeat for Laura Robson, who says her left wrist will need further treatment before her next tournament in Paris in two weeks' time. The British number one was horribly rusty and made 32 unforced errors in just 50 minutes: a legacy of playing her first full match since early October.

Heather Watson will be very frustrated to have lost a tight first-round match after battling through three rounds of qualifying, but she looks like her pre-glandular fever self, and in time should be confident of returning to the world's top 50.

Watson, in contrast, kept 31st seed Daniela Hantuchova occupied for two hours and 34 minutes before going down 7-5 3-6 6-3 to the Slovakian.

With both Robson and Watson scheduled among the opening matches, it took less than three hours for Andy Murray to be left as the lone Briton in singles competition.

Robson, who turns 20 next week, arrived in Melbourne with a wrist injury but said before the match that it was no longer causing her any pain.

A lack of match sharpness was certainly clear from the outset on Court Three, as she opened with four straight errors to drop serve and lost the first nine points in a row.

There was a big cheer for the Australian-born Robson when she finally got on the board but Flipkens, a Wimbledon semi-finalist last year, was much the stronger.

Robson simply could not find her range and racked up 32 errors to her opponent's four as she lost eight straight games and became the first player to go out of the tournament.

"It was up and down the whole time, and I don't think I ever really got into a rhythm at all," said Robson.

"I wasn't really able to deal with her slice that well. It just didn't go well. I definitely expected to play better, but it happens.

"And I didn't really have any expectations going in because I didn't know what it was going to be like out there."

While Robson trooped unhappily back to the locker room, Watson was only just getting going on the nearby Court Two against Hantuchova.

The 21-year-old from Guernsey, who came through three rounds of qualifying, recovered an early break in the first set but double-faulted facing a fourth break point at 5-5, and smacked her racquet in frustration.

Hantuchova's heavier, flatter hitting had just given her the edge in the first set but Watson began to step in and attack the returns in the second, breaking twice to force a decider.

Fighting spirit is rarely in short supply where Watson is concerned and she battled back from 0-40 in her first service game, before recovering from 4-1 down to trail 4-3.

She had spent most of the match trying to keep pace with Hantuchova, however, and the pressure ultimately told when the Briton was broken for a fifth and decisive time.

"I felt I was close throughout the match," said Watson.

"I started slow in the third set - I should have got up while she went to the bathroom [before the final set] and kept moving - but I had plenty of chances and didn't take them."

Watson is ranked 121st after suffering with glandular fever in 2013, and she will slip further after failing to match last year's run to the third round in Melbourne.

"I feel like it's an opportunity lost for me," she added.

"I really looked forward to this draw, but I've played 10 matches already this year - if you'd told me that last year I would have taken it in a second.

"Even though I might be dropping in the rankings, I'm not worried about that. I've had a good start to the year, I've improved as a player, and it's been a positive few weeks."