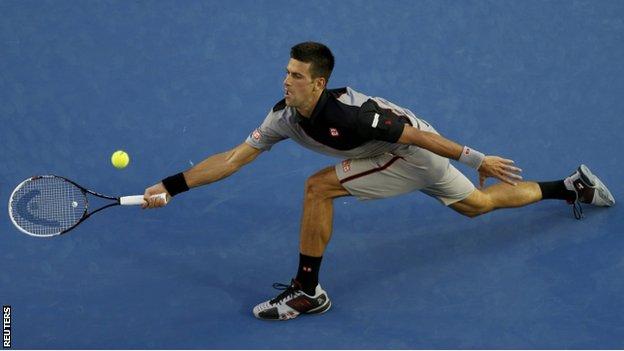 Defending champion Novak Djokovic overcame the stubborn resistance of Slovakian Lukas Lacko to reach the second round of the Australian Open.

Djokovic, who is seeking his fifth Australia Open title, will next face Argentine Leonardo Mayer.

"I know that I haven't played my best, especially in the second set," said Djokovic. "But credit to my opponent who was playing really nice tennis from the baseline.

"On the other hand I was a little bit too passive in some stages of the match and was trying to find the proper, I would say, setting and proper balance and footing in the court."

The American world number one, who is seeking an 18th major title, extended her winning streak to 23 matches.

"I was so ready today because she's such a good player with such a good future," said Williams.

"I would love to have a win here but there are so many tough opponents in the tournament so I have to come out and enjoy myself."

David Ferrer, a semi-finalist in Melbourne in 2011 and 2013, made light work of beating Colombian Alejandro Gonzalez, taking just two hours and five minutes to reach the second round.

For a gallery of pictures from day one check out the BBC Sport Facebook page.

Wawrinka, who lost 12-10 in the fifth set to eventual champion Novak Djokovic in the fourth round in Melbourne last year, had no need for a marathon match on this occasion, with Golubev succumbing to a calf injury.

"We never want the opponent to retire for injury, but that's what happened," Wawrinka said. "I was feeling good. I think it's one of my best starts in a Grand Slam. I was moving well, playing strong, playing OK. I made some mistakes, but for the first match it's never easy."

After beginning the year by reaching the final of the ASB Classic in Auckland, Venus Williams was hopeful of putting recent injury problems behind her.

She began well, breaking her opponent's serve three times in taking the first set, but Makarova responded to take the second.

Williams led 3-0 in the decider but 21 unforced errors in the set proved her undoing.

"My level was a little bit too up and down. Obviously my error count was a little high," Williams said. "I have to give her a lot of credit, though, she was very determined and played hard."

Luksika, playing just her second Grand Slam tournament, broke the sixth-seeded Kvitova in the eighth game of the third set after the Czech player hit a double-fault.

Kvitova broke back to make it 5-4, but then dropped her serve in the last game to go out in the first round of a Grand Slam for the first time since the 2011 US Open.

"I had a great pre-season, I worked very hard," said Kvitova. "I had great matches and I was just trying, and probably I put a lot of pressure on my back.

"I think that probably I wanted it too much, and then everything just fell down."

The most anticipated match of the opening session on day one did not feature a likely champion, but instead a battle of the ages.

Japan's Kimiko Date Krumm, 43, took on Switzerland's Belinda Bencic, 16, in a match that boasted the largest age gap since 47-year-old Martina Navratilova lost to 19-year-old Gisela Dulko at Wimbledon in 2004.

Bencic is the Swiss-born daughter of parents who emigrated from Slovakia. She was coached from a young age by Melanie Molitor, better known as the mother of Martina Hingis. The latter was courtside throughout qualifying as Bencic powered into her first Grand Slam main draw.

There she battled past the irrepressible Date Krumm - who is five years older than Bencic's mother - 6-4 4-6 6-3.

"[Hingis] gave me some advice, and I tried to do it," said the teenager.

"It was tactics and mental, just not all about tactics. I also had to do my game, and I think the most important part was in my head."

It took just two hours and 34 minutes for any hope of a British challenge in the women's draw to evaporate completely, as Laura Robson was blown away 6-3 6-0 by Belgium's 18th seed Kirsten Flipkens, before Heather Watson lost 7-5 3-6 6-3 to Daniela Hantuchova.

While British number one Robson was out in 50 minutes, Watson put up a far stronger fight, seriously testing former top-five player Hantuchova before eventually succumbing as the 31st seed's experience told.

Melbourne Park is preparing for temperatures exceeding 40C for several days from Tuesday, and Australian Open officials have been explaining how that affects the tournament.

The "extreme heat policy" is based around something called the Wet Bulb Global Temperature reading, or WBGT, which combines temperature with humidity and wind speed. So theoretically, play could continue with the air temperature above 40C.

"They sit down every five to 10 minutes for 90 seconds at change of ends, so there is the chance to lose some heat at that time. Tennis by and large is a low-risk sport and that's why, like cricket, we can play in these conditions and not be too concerned."

Sometimes I've just got to tell myself what to do. If it comes out a bit loud, so be it.

"We speak half English, half German. When we need to speak about serious, serious stuff, we turn to English. My knowledge of the German language needs to be updated for the serious stuff." Novak Djokovic explains the communication strategy with new coach Boris Becker.

"No. Like zero, you know. I tried to find the game in YouTube, so I could watch a couple of games." Fourth seed Li Na admits she was not too clued up on 16-year-old opponent Ana Konjuh.

"The last 12 months I have had [health] issues, but this year I definitely am looking forward to having a good run and feeling well." Venus Williams insists she is still in the sport looking to win titles after a first-round loss to Ekaterina Makarova.

"I just really didn't want that to happen again. I was just determined to try to do something a little different. I guess I did." Matthew Ebden on beating Nicolas Mahut in five sets, having led two sets to love. The Aussie was beaten from two sets up in the previous two years.

"Sometimes I've just got to tell myself what to do. If it comes out a bit loud, so be it." Sam Stosur on yelling "Stop pushing the ball!" in her first-round win.