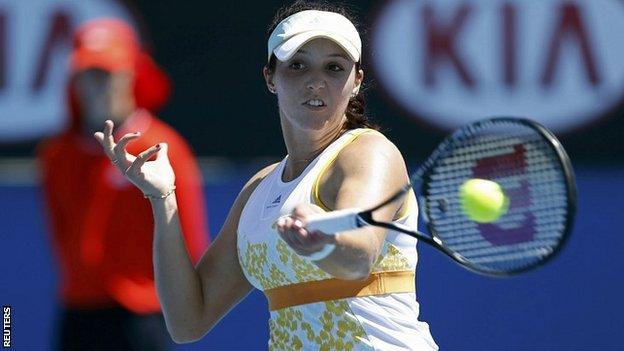 Laura Robson played down her wrist injury and set her sights on getting fully fit after a heavy defeat in the first round of the Australian Open.

The British number one was beaten 6-3 6-0 by Belgian 18th seed Kirsten Flipkens in 50 minutes in Melbourne.

It was 19-year-old Robson's first full match of the season after she picked up a wrist injury.

"I prefer not to talk about my wrist because then it's just going to become this massive excuse," said Robson.

"Really she just played better than me."

This was a hugely dispiriting defeat for Laura Robson, who says her left wrist will need further treatment before her next tournament in Paris in two weeks' time. The British number one was horribly rusty and made 32 unforced errors in just 50 minutes: a legacy of playing her first full match since early October.

Robson had retired during the second set of her only other match this year, and went into Monday's match relying on a few days of practice.

"Practice is a lot different to playing a proper match in Slams," she said.

"I would have loved to have had some more points beforehand, but that's what happens sometimes."

Ranked 48th, Robson has won just six matches since reaching the last 16 at Wimbledon, and she will lose further ranking points after failing to match last year's run to the third round in Australia.

The manner of her defeat by Flipkens will serve as an extra incentive to turn the situation around.

"Definitely it motivates you to do better and be as fit as possible, and that's what I'll do in the next couple of weeks," said Robson, who turns 20 next week.

"It's a tough one today, but everyone has those kind of days, and you have to just come back from them stronger.

You have small niggles all the time, but last year over the grass season and the clay season where I was playing pretty well, I was completely healthy.

"So I'd love to get back to that, you know, and that's what I'm going to work towards."

Former British men's number one Jeremy Bates, who is head coach for women's tennis at Lawn Tennis Association (LTA), said Robson's injury was a major factor in her disappointing display in Melbourne.

"It was a tough day for Laura, who is really short of match practice after a wrist injury and there is something nagging there on the back of her mind," Bates told BBC Radio 5 live.

"From a tennis playing perspective, the wrist is critical. It is where you take all the impact and all the shock on your body. If you feel pain there when you strike the ball, then it is definitely a critical factor in being able to compete or not."

Among Robson's immediate targets is a return to Fed Cup duty with Great Britain in Budapest next month.

Judy Murray's team will include Heather Watson, who also lost on Monday, but be without Elena Baltacha and Anne Keothavong, who have both retired.

"I'm really looking forward to Fed Cup," said Robson. "I'm happy to be selected again. I think as a team, we seem to work pretty well.

"It's going to be a bit different this year without Anne and Bally. I know Heather is looking forward to it, too. We will see what we can do."

"I love playing for Great Britain, and I think we'll get really fired up in a team environment."