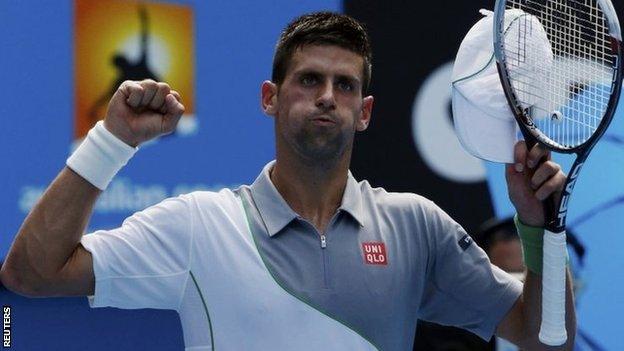 Defending champion Novak Djokovic made light of the intense Melbourne heat to ease into the third round of the Australian Open.

The hot weather again caused problems for the players, with Croatia's Ivan Dodig forced to retire during his match against Damir Dzumhur, while Pat Rafter's return and Bernard Tomic's first-round retirement also captured the headlines on day three.

Second seed Djokovic, watched by coach Boris Becker, extended his winning streak to 26 matches but only after an early scare when he turned over on his left ankle at 3-0 in the first set.

He fell to the ground but did not call for the trainer and recovered to take the opening set in 22 minutes, allowing Mayer to win just eight points.

"It was just I slipped a little bit," said Djokovic, who only needed 107 minutes to complete victory. "It was an instant discomfort, but it was OK after."

Williams' routine victory earned her a place in the history books as she equalled Margaret Court's record of 60 match wins in the Open era at the Australian tournament.

The result was never in doubt from the moment the American, a five-time winner in Melbourne, broke the world number 104's serve in the second game of the match.

"I just tried to hit a bunch of aces and a bunch of winners - that's all you can do because it's too hot to get into long rallies," she said.

Belinda Bencic, who has been described as "the new Martina Hingis" and is occasionally coached by the Swiss great's mother, appeared overawed early on as Li took the first set without dropping a game.

The teenager put up more of a challenge in the second set, breaking serve twice to threaten an upset.

But on both occasions Li, a beaten finalist in Melbourne in 2011 and 2013, hit back instantly before winning the tie-break to ensure she remains on course for a third final appearance in Melbourne.

"It was a little bit warm out there," said Li. "But I am pretty happy. At least I won the match and am still in the tournament."

The heat is still on

There might have been fewer retirements and tales of on-court vomiting or fainting on day three, but the conditions were still punishing.

Tuesday's peak of 42.2C was almost matched at 14:00 local time when the temperature hit 41.5C, albeit with more cloud cover than the previous day.

Croatia's Ivan Dodig was the major victim of the conditions as he was forced to retire after two hours and 22 minutes of a lively encounter with Bosnia's Damir Dzumhur on Court 13.

"Today, 30 minutes after the match I could not walk," said Dodig afterwards. "I was thinking I could maybe even die here."

After the supposed relief of a 'cooler' third day, Thursday promises a high of 44C, threatening the 2009 record of 44.5C.

Pat Rafter's comeback lasted only one match as he and Lleyton Hewitt were beaten in the first round of the men's doubles.

The 41-year-old, who retired in 2001, was far from disgraced alongside great friend Hewitt, but South Africans Raven Klaasen and American Eric Butorac were the party poopers on Hisense Arena as they came through 6-4 7-5.

Former two-time US Open champion Rafter, now Australia Davis Cup captain, said: "It started off all right. I made a return on the first game and that was the last one I made.

"That was always my big concern. I thought I could serve OK and volley OK. The returning was awful.

"I was pretty nervous. I was copping it in the locker room. Ivan Lendl's a menace - he's a pest of a guy. But it's good fun. I didn't want to make an idiot of myself and I think I got through it OK."

That was the headline that greeted Australian hope Bernard Tomic on Wednesday after he retired one set into his much-hyped first-round match against Rafael Nadal.

"Jeers For Tomic After Walk-Off" continued Melbourne's Herald Sun, prompting Tomic to hold a media conference to explain the situation.

"I had the scans in the morning, which confirmed that obviously I was right," said the 21-year-old. "I tore my groin playing the other day.

"It's just a small one. It's not that big, but if I had played on it it would have been 10 times worse, they say, so I could have been out potentially for three or four months."

"I said to the physio, 'It's literally boiling lying on this, so can you hurry up?' It was frying my body." Colin Fleming did not enjoy his brief bout of on-court treatment

"Today, with the heat, I really was thanking my dad for telling me to serve hard 20 years ago. It's really paying off now with quicker points." Serena Williams

"Obviously there's a point where you have to be sensible. If it gets too hot, it is dangerous." Questioner: "It's going to be 44C tomorrow." "Yeah, that's probably quite dangerous." Even Australian hope Casey Dellacqua thinks the temperature might be getting a bit out of hand.

"Bosnia and Serbia used to be one country more than 20 years ago. We all have a very similar mentality. For some reason people from that region have a big talent for sports." Novak Djokovic congratulates Bosnia's Damir Dzumhur on a first Grand Slam main-draw victory.

"I think I was misunderstood. Obviously they [spectators] thought I was shaking Rafa's hand because he's too good and I'm forfeiting the match because I can't play against him." Bernard Tomic on being booed by his home crowd on Tuesday