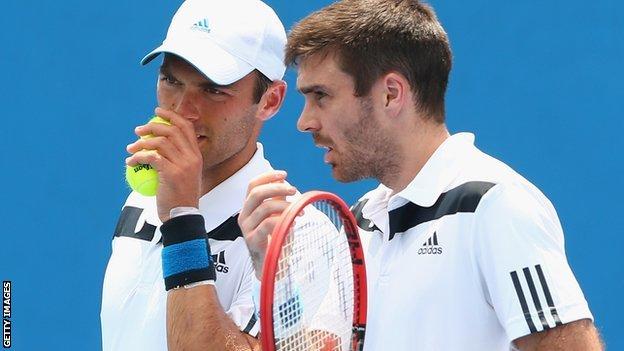 Ross Hutchins made a winning return to Grand Slam tennis after recovering from a form of cancer as he and doubles partner Colin Fleming reached the second round of the Australian Open.

On another sweltering day, where temperatures again passed 40C, the British pair fought back to beat Australian Marinko Matosevic and Poland's Michal Przysieszny 4-6 6-4 6-0 at Melbourne Park.

Hutchins, 28, missed the entire 2013 season after being diagnosed with Hodgkin's lymphoma in December 2012.

After six months of chemotherapy, the Englishman was told in July he was in remission and began the long process of getting back to full fitness.

He returned to competitive action with Scotland's Fleming on 29 December and, after defeats in Auckland and Brisbane, the pair earned their first victory back together on the biggest stage in Melbourne.

"It's an amazing feeling to be back, and especially to get our first win since coming back in 2014," said Hutchins.

"I think we have played some good tennis throughout this year so far, but unfortunately we lost our first two matches. My level probably wasn't as high as I hoped it had been.

"But I think we did well to dig out a win today. It was brilliant and I'm loving the feeling right now."

Fleming added: "When we won I felt a bit emotional myself. I don't know how Ross felt, but just to get that first win under our belt [was great].

"Obviously we had played a few matches, but the first win is a real release and I'm looking forward to playing again in the next couple of days."

It is the first time since they reached the last 16 at the 2012 US Open that the Britons have appeared at one of the sport's four major tournaments.

"It's been a strange 12 months," said Hutchins. "I don't actually remember that clearly the last year. So much has happened in terms of other things off court and with the illnesses and different issues.

Who is Ross Hutchins?

"But I don't tend to think of it as, 'Oh, a year ago I was in hospital'. I almost think that, 'Well, I've still been playing the last six or seven years and I'm back with Colin'. It doesn't feel like I've missed a year."

Hutchins made an inauspicious start to his Grand Slam comeback, racing back to the locker room to collect something before the warm-up and moments later dropping serve in the first game.

It would prove to be the only break of the first set and, as the temperature touched 41C, Fleming required treatment on his thigh.

Hutchins and Fleming were in deep trouble facing two break points at 4-4 in the second set, but this time the Englishman's serve kept them in it and they dominated from that moment.

The pair finally made the breakthrough in the following game to clinch the set and raced through eight straight games on their way to the finish line.

With compatriots Laura Robson and James Ward, as well as Andy Murray's coach Dani Vallverdu, looking on, the Britons sealed victory after one hour and 40 minutes and shared an emotional hug at the net.

The pair, who have made qualifying for the season-ending ATP Finals their target, could face seventh seeds Rohan Bopanna of India and Pakistan's Aisam-Ul-Haq Qureshi in round two.

Asked if it might be too early to realistically target winning a first major title, Hutchins added: "I think we should always be that ambitious.

"That's the reason why we're here and why we play the game.

"That's what I missed most last year playing with Colin; having the mindset, competing with the best teams, and improving our own team."

Dominic Inglot made it two wins from two matches for British doubles players as he and Filipino partner Treat Huey fought back to defeat Colombians Juan Sebastian Cabal and Robert Farah 4-6 6-4 6-3.