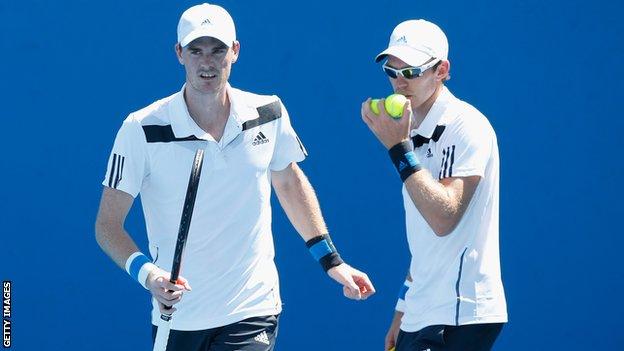 Jamie Murray has been treated for the effects of heatstroke at the Australian Open.

"He doesn't think he would've been able to complete his match had it gone to three sets," said Fuller.

Play was disrupted for more than four hours on Thursday as the temperature exceeded 40C for a third consecutive day.

At 13:53 local time (02:53 GMT) and with the temperature at 41C, the "extreme heat policy" was implemented, suspending matches on uncovered courts.

Play continued on Rod Laver Arena and Hisense Arena as their roofs were brought across.

"He started to feel the effects shortly after coming off court and spent a couple of hours being treated by doctors and physios," added Fuller.

"He's still not feeling at all well, but is trying to have some food in the players' restaurant and hopes he may be able to continue in the tournament. His next match is scheduled for Saturday."

"We evolved on the high plains of Africa chasing antelope for eight hours under these conditions," he said.

"There will be some players who complain and no-one is saying it is terribly comfortable to play out there but from a medical perspective we know that man is well adapted to exercising in the heat. Whether it is humane or not is a whole other issue."

Andy Murray eased past France's Vincent Millot in the second round of the men's singles on the Rod Laver Arena.