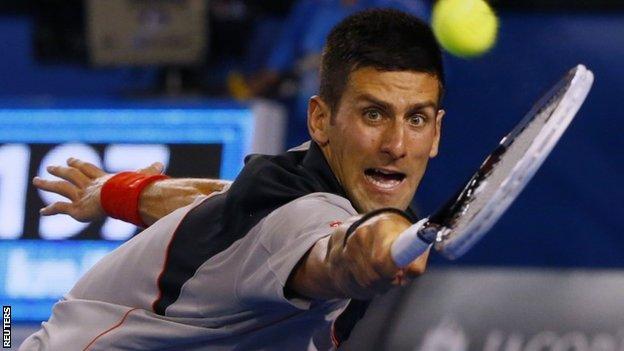 Novak Djokovic continued his impressive progress at the Australian Open with a straight-sets win over Denis Istomin.

The Serb, who has won the past three titles in Melbourne, won 6-3 6-3 7-5 and plays Fabio Fognini in round four.

The conditions continued to be an issue for players, with the temperature reaching a high of 41.4C a day after matches were suspended on Thursday because of 43.3C heat,

Five-time champion Williams was not at her best and appeared to be struggling with the heat, though she still proved too strong for Hantuchova.

The world number one raced into a 5-3 lead but had to save two break points to hold serve before clinching the first set.

Williams, who has yet to drop a set in the tournament, broke early in the second but her opponent was in battling mood and responded to level at 3-3.

Hantuchova's hopes were short-lived, however, as Williams seized the initiative in the Slovakian's next service game and served out for the victory, sealing it with a powerful forehand winner on her fourth match point.

"It was a tough match," said Williams. "Daniela is a great opponent so I'm really happy to come out with the win. It was hot but you have to play, you have to be ready and prepare yourself mentally. I'm excited to get through."

Serena and sister Venus Williams later withdrew from the doubles shortly before their first-round match because of an injury to Venus's left leg.

Ferrer reached the fourth round of a Grand Slam for the 15th consecutive time as he eased past Chardy.

After the Spaniard won the opening set in straightforward fashion, Chardy put up a stronger challenge in the second but was unable to convert any of his five set points, allowing Ferrer to take it on a tie-break.

That proved the decisive moment in the match, as Ferrer completed the victory to set up a meeting with Germany's Florian Mayer for a place in the quarter-finals.

Home favourite Stosur edged a thrilling first set after rain stopped play with when she was 8-7 up in the tie-break.

Former world number one Ivanovic, 26, broke serve once in the second set and twice in the decider as she wrapped up victory with a simple volley into an open court.

"It was a match of the highest quality. She is a very tough opponent and I just hung in there," said Ivanovic, who reached the Australian Open final in 2008.

"Winning in Auckland gave me a lot of confidence and I'm looking forward to the challenge of playing Serena."

Four-time champion Djokovic eased safely into round four with a straightforward victory over Uzbekistan's Istomin.

The Serb, whose last defeat in this tournament came in the 2010 quarter-finals, broke in the third and ninth games to wrap up the first set and another break proved decisive in the fourth game of the second set.

Djokovic looked set to clinch victory without dropping his serve, but while serving for the match at 5-4 up in the third set, he double-faulted and hit a backhand into the net to give Istomin a lifeline.

However, the second seed immediately broke back and made no mistake second time around in serving out the match.

"I needed to have very fast footwork and a precise first service, as high a percentage as possible, using every opportunity to take control over the rally," he said. "I've done really well."

Fourth seed Li, runner-up in 2011 and 2013, survived a Safarova match point as she narrowly avoided becoming the highest-ranked casualty of the first week in a contest lasting two hours and 37 minutes.

Safarova, who has never beaten a top-10 opponent in a WTA Tour event, served for victory in the ninth game of the second set and held a match point in the 12th but Li held on before dominating the tie-break to force a decider.

The third set was delicately poised until Li broke the Czech in the eighth game, and Safarova had no answer.

Lleyton Hewitt has his 'Fanatics' and Bernie Tomic has 'Tomic's Kittens', but the biggest noise around Melbourne Park on Friday came from an unexpected love affair between Australia and Canada.

Genie Bouchard, the rising star and 30th seed, is through to the fourth round of a Grand Slam for the first time and on course for a quarter-final with Serena Williams.

And the 19-year-old has been vociferously supported throughout by a group of Australian students, 'Genie's Army', who have sung a catalogue of songs about the Canadian and given her gifts including a toy kangaroo after her first two wins.

"They showed up to my first round away on Court 15 with their t-shirts," Bouchard told BBC Sport.

"They're really into it and supportive and it's great to see I have 'super fans' in Australia. They create a big atmosphere on the court and it's fun to play when they're there."

"I tell you this: I'm not equipped to answer that question. I'm going to leave it alone." Serena Williams is asked for her thoughts on the tournament doctor's suggestion that man "evolved on the high plains of Africa chasing antelope".

"Serena is on top of the game for so long now. You know, she's someone we admire. I look forward to that challenge. I've been playing some good tennis and it's going to be nice test to see where I'm at." Ana Ivanovic is buoyant ahead of her fourth-round match with the world number one.

"Because I didn't practise much, I was not able to get ready for the next match. Today I was completely kaput." Poland's Jerzy Janowicz produces his best German to sum up a day in which he lost in straight sets to Florian Mayer while playing in sunglasses.

"I think five centimetres saved my tournament. If she hit it in, my whole team was on the way to the airport." Li Na on how Lucie Safarova was within a whisker of knocking her out on match point.

"I was a little bit sick and also my mind was not working. I just watched the ball and just hit it. I didn't know where I hit it." Li's compatriot Zheng Jie after her 6-2 6-4 defeat by Australia's Casey Dellacqua

"They are very sad. Especially when you tell the fashion brand that they have to make white, they are like, 'Oh, OK, what can we do?' It's just for hopefully two weeks. Then they can go again." Tomas Berdych on breaking it to his kit sponsors that the blue-and-white striped number he's wearing in Melbourne won't wash at Wimbledon.

"I've always said I enjoy playing in the heat, the conditions and stuff. But today wasn't an example of that." South African Kevin Andersen could have done without spending four hours coming back from two sets down to beat Edouard Roger-Vasselin.

"Some of the newspapers and TV stations called me after the match. They said the whole of Bosnia didn't sleep tonight, that everybody was in front of their TV and they were so proud." Damir Dzumhur, the 21-year-old qualifier, who became the first Bosnian to reach the main draw of a Grand Slam tournament, after losing to Tomas Berdych.