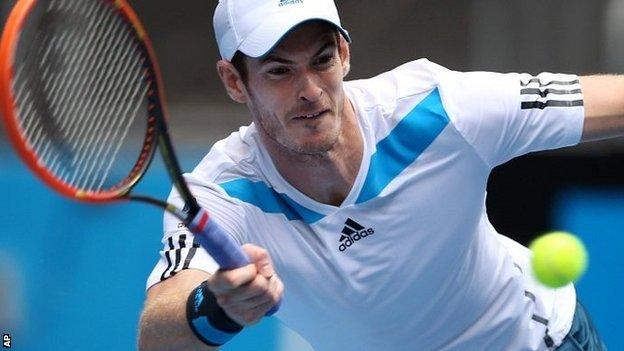 Andy Murray gave evidence that he could yet be a contender for the title with an impressive third-round win over 26th seed Feliciano Lopez at the Australian Open.

There he will face France's Stephane Robert, the first man ever to make the fourth round after losing in qualifying only to get a "lucky loser" place when another player withdrew.

Murray, 26, will go into that match as a heavy favourite but has played down his chances of winning a third Grand Slam title next Sunday so early in his return from surgery.

"I've recovered well after the matches," he said. "From time to time there's a bit of stiffness and soreness, but for the most part it's been good.

"You normally are going to get some stiffness in an area where you've had surgery. It takes a bit of time for that to go away."

Two straight-sets wins in the opening rounds were encouraging, but no great indicator of his chances given the low-ranked opposition

Lopez, 32, represented the first serious test of Murray's form, and in a blustery 20C - in contrast to highs above 40C for the previous four days - the Scot passed in some style.

"To have won nine sets out of nine in the space of five days is a hugely encouraging sign for Murray, who hasn't had such a workload since the middle of September. After a sluggish start, his serve became a very effective weapon, and after a tight first set the tie-break he played was reassuringly commanding.

"He's fortunate to be able to face a third opponent outside the top 100 in the fourth round. Only if he wins will we start to learn whether he's a genuine contender for the title with the likes of Federer and Tsonga awaiting in the quarter-finals."

"Today was a big step up for me. Feliciano is a top 30 player and is a tricky opponent to play," said Murray.

"I know I have a good record against him, but it doesn't change the fact he's not an easy guy to play against. He's a very different type of opponent to what you normally face, so it was a good test for me and I did well."

Neither man was at their sharpest in the early stages, Murray dropping serve immediately before Lopez returned the favour, but it was the Wimbledon champion who posed the greater threat.

Four break points slipped by in game six and two set points at 6-5, the Spaniard's big serve and attacking instincts keeping him alive, but Murray produced when it mattered in the tie-break.

It was the Briton who swept into the net and grabbed the early break at 1-1 with a forehand volley, and two deadly drop shots eased him into a 5-1 lead before he clinched the set with a forehand into the corner.

Murray was dictating the points from the baseline now and Lopez, under pressure, dropped serve with a double-fault at the start of the second.

Who is Stephane Robert?

Stephane Robert is a 33-year-old Frenchman who came into the draw as a "lucky loser".

He is ranked 119 in the world, is 6ft 1in and says on his ATP profile: "I had been all my life playing what I call 'casino tennis', hitting crazy shots, gambling with big shots and closing my eyes just hoping the ball would go in."

It was all going to plan for the fourth seed, whose defensive skills looked back to their best - and the fact that he continued to berate himself after errors felt more like things getting back to normal than any sign of real distress.

There was a hint of danger for Murray when trying to serve out the set at 15-30 as he chased down an excellent Lopez lob, but he played a clever dipping backhand and closed it out moments later.

When Murray planted a brilliant backhand winner down the line on his way to breaking at the start of the third, an eighth win in eight matches against Lopez was within sight.

If the opening games of the match had seen Murray searching for his rhythm, the final set was the Scot at his best as he fired 11 winners and dropped just one point behind his first serve to seal the win in two hours and 15 minutes.