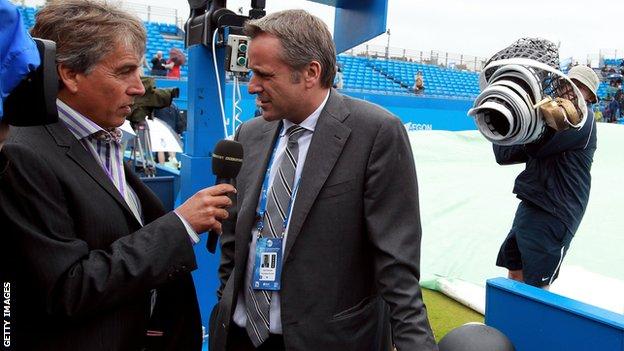 Before he sat down last Saturday to share his thoughts about his Australian Open chances, Andy Murray checked his watch to make sure he wouldn't be late for a meeting with new ATP executive chairman Chris Kermode.

Murray said, with a smile on his face, that even though he wouldn't dream of doing such a thing, some players use these gatherings with the ATP chief as an opportunity to make the top man squirm.

"It was great, actually," Kermode said, as he sat down to talk to the BBC about his plans for the future.

"I was very apprehensive about having to speak to 150 players and set out my stall, but they were incredibly receptive."

Who is Chris Kermode?

Post-playing: Worked as a tennis coach before going on to work in the music and film industries

The popular 49-year-old Briton, who has been so instrumental in the success of the Aegon Championships at Queen's Club and the season-ending World Tour Finals at London's O2 Arena, believes he has clocked up about 10 hours a day just talking and listening to the players since arriving in Melbourne.

He will already have heard some conflicting views. While Roger Federer would like to see an increase in the speed of courts around the world, Rafa Nadal is adamant that wouldn't be good for "the show". The Spaniard would like to see fewer hard-court events on the schedule, while others think sets should be shortened to keep minds and bodies healthy throughout the season.

Kermode takes the view that men's tennis does not need much of a makeover.

"Unquestionably, the tennis in the last 10 years has been the best I have ever seen," he says.

"I'm not sure with the talent and the way the game has grown in terms of the endurance level whether speeding up the courts will immediately mean the game is shorter. I think if the product is good and exciting, people will want more of it.

"What's interesting is that people say how tough it is physically, but then actually you see how long these guys are staying in the sport. It seems to be a counter-argument. They are playing for a lot longer - way longer - than the previous generation."

In February, Kermode will travel to Buenos Aires and then to Rio de Janeiro, which is hosting a new ATP 500 event.

The Challenger Tour will also be on his list of priorities.

It is currently very tough for any player outside the top 100 without the luxury of national funding to make a decent living on tour.

In the week the ATP asked Kermode to steer them through the next three years, Novak Djokovic was very critical of the sport's drug-testing programme as he rallied to the defence of friend Viktor Troicki, who is serving a 12-month ban for failing to undergo a blood test.

Djokovic expressed a lack of faith in the current system, while others believe it is not robust enough. The relatively small number of blood and out-of-competition tests carried out in recent years certainly does not reflect well on the sport.

"The programme has improved significantly over the last few years," Kermode replies, before making it very clear that it is a priority for the ATP to prove to cynics that the sport is not too good to be true.

"It's a big issue for me to make the statement that our sport is clean - which I wholeheartedly believe it is - and we are gathering all the information from all the governing bodies to make sure we will be world leaders in making sure our programme is the best it can be.

"I will make sure as a governing body that we will do everything. We are taking this incredibly seriously and, for me, the concern is making sure we are telling the world the facts. We are clean."

A decision will also need to be made this year about whether London should continue to host the World Tour Finals when the current contract expires in 2015.

Kermode promises there will be no nepotism from the founding father of the event when he looks at it "dispassionately" and weighs up the benefits of spreading the gospel around the world.

He offered few hints as to his thinking other than to promise he would not be chasing "easy money" at the expense of spectator and media engagement.

The sport is in very good shape. But however talented the stars of the next generation, they are extremely unlikely to be as appealing as the quartet currently at the top of the men's game.

Kermode puts his faith in regeneration, having grown up at a time when Bjorn Borg, John McEnroe and Jimmy Connors looked like they would take some replacing.

"I think men's tennis is one of the greatest sports on the planet," he says. "The changing of the guard is one of the most fascinating things in any sporting generation."