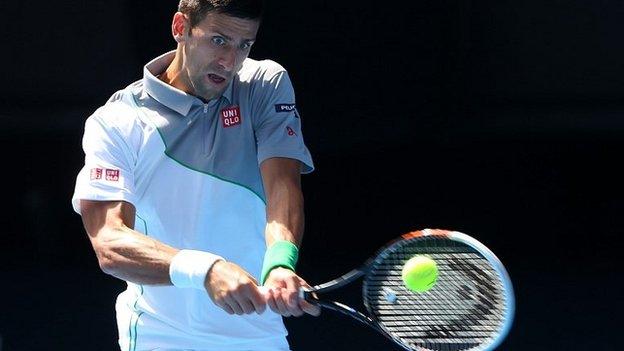 Novak Djokovic eased past Fabio Fognini to reach the quarter-finals and keep alive his bid for a fourth straight Australian Open title and fifth in all.

The Serb beat Italy's 15th seed 6-3 6-0 6-2 and will play Switzerland's Stanislas Wawrinka in the last eight.

Women's fourth seed Li Na of China was untroubled in a 6-2 6-0 win over Russia's Ekaterina Makarova.

The undoubted shock of the day was world number one Serena Williams's defeat by Ana Ivanovic.

Meanwhile, Britain's Dominic Inglot partnered Treat Huey of the Philippines to a 6-4 7-6 (7-1) third-round victory against India's Rohan Bopanna and Aisam-Ul-Haq Qureshi of Pakistan in the men's doubles.

The world number two needed just 92 minutes to brush aside the out-of-sorts Italian, who was struggling with his serve and game in general.

Djokovic enjoyed 22 break opportunities and lost just 10 points on his own serve.

The Italian raced to the first set in 24 minutes but Kerber took a short break between sets and broke the 29th seed three times to send it to a decider.

Pennetta lost her serve twice in the third but broke Kerber three times in return and will face fourth seed and fellow 31-year-old Li Na.

"I'm a little old so I'm starting to enjoy (tennis) more. When you are young you want to win so much," said Pennetta, whose comeback continues apace after she returned last February from a wrist injury that caused her ranking to drop as low as 166th in the world.

Teenager Eugenie Bouchard, named the WTA's Newcomer of the Year in November, continued her impressive run to set up a quarter-final with Ana Ivanovic.

In beating Dellacqua, Bouchard became the first Canadian to reach a Grand Slam quarter-final in 22 years.

"It was a tough battle but I'm really excited to keep getting better as a tennis player," she said. "I just tried to stay calm and focus on every point."

Wawrinka kept his nerve in two tie-breaks to set up a quarter-final with Djokovic.

The eighth seed, who lost to Djokovic in a five-set fourth-round duel last year, won 90% of his first serve points against Robredo.

"The serve was really good," he said. "I feel really good and I haven't had too many matches before today.

"I had one walkover and my first opponent pulled out after the first set, so it was good to have a tough match."

Li Na trounced Ekaterina Makarova in just under an hour to storm into a Melbourne quarter-final against Flavia Pennetta.

The former French Open champion faced four break points but her performance was far more assured than the second round when she had to battle back from match point down against Lucie Safarova.

"At least she's one day older than me, so I'll play an older player," said Li, referring to Pennetta. "So nobody will talk about my age."

Ferrer was broken in the first game of the match and trailed 3-1 before taking control and advancing to his fourth straight quarter-final in Melbourne.

The Spaniard, who reached a career-high ranking of third in the world at the end of last year, is also into a ninth consecutive Grand Slam quarter-final.

Tomas Berdych trounced Kevin Anderson in a battle of big servers to set up a quarter-final with David Ferrer.

The 28-year-old, wearing his trademark blue-and-white striped shirt, broke Anderson five times, while he held his own serve for the fourth match - a run of 53 service games.

"There is still a lot of petrol left which I'm definitely going to need in the next match so I'm really happy for that," he said.

"I think the last quarter-final at the US Open really changed our mentality about what we can do," said Inglot.

"We used to look at one round, two rounds, but after the quarter-final I thought we can really do well.

"Bar the Bryans, we've beaten every other team. Why not at a Slam?"

Colin Fleming got off to a winning start with Australian Anastasia Rodionova in the mixed doubles, winning 6-4 6-4 against Svetlana Kuznetsova and Nenad Zimonjic.

QUOTES OF THE DAY

"That was in your best days, Boris! But he's working every day, stretching, and we're going to play in Miami. I can't wait to get some return winners off his first serve." Novak Djokovic after treating the Rod Laver Arena to a new impression - the serving technique of his coach, Boris Becker.

"When we were starting the match and they were talking about all her Grand Slam titles, it was quite impressive." Ana Ivanovic did not let the introductions put her off against 17-time Grand Slam champion Serena Williams.

"I'm going to go home and see my son. His name is Chip. So we're going to spend some time together. I miss him." Williams thoughts turn to her "son" [a Yorkshire terrier] after defeat by Ivanovic.

"She's one day older than me. Yes, I'm sure. 100%." Li Na is quick to correct the suggestion that next opponent Flavia Pennetta is a day younger than her.

"I think when you're old, you're starting to have different goals and try to enjoy a little bit more the life, no?" Pennetta is feeling her age, at 31.