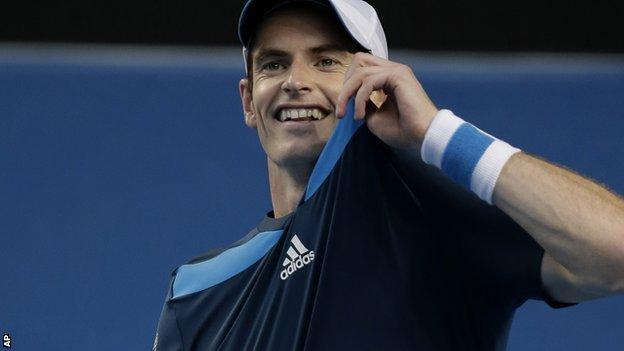 Andy Murray came through his first rocky moments at this year's Australian Open to beat French 'lucky loser' Stephane Robert in four sets and line up a heavyweight quarter-final.

There he will meet Roger Federer after the four-time champion in straight sets.

"A contest broke out on the Hisense Arena in the third set - and it was a lot of fun to watch. Being put under pressure for the duration of the 70 minute set will have done Murray no harm at all: even if passing up four match points and losing the tie-break was not part of the script.

"The first four rounds have shown what a fabulous physical recovery Murray has made from surgery, but with three opponents ranked outside the top 100, it's not a strong enough indication as to whether he's sufficiently match sharp to beat the very best in the world."

Robert, ranked 119, was outclassed for the first two sets on a blustery and relatively cool afternoon at Melbourne Park, but took the third with a surge of form that saw a fuming Murray smash his racquet in frustration.

"I dominated 95% of the match, and for 15 minutes didn't close the match out," said Murray.

"But I still created chances, even when I wasn't playing so well at the end of that third set. And then the fourth set was fairly comfortable.

"I lost my serve once, so it was pretty good for the most part."

Asked about breaking his racquet, he added with a smile: "Sometimes it's necessary. My racquet bit the dust. Unfortunate for it, but I was glad I managed to start well in the fourth."

A late call-up as a replacement to the main draw saw Robert, who describes his style as "casino tennis", make an unprecedented run to the last 16.

The 33-year-old was probably being more sincere than most players when he said before the match that he had nothing to lose, having already been beaten in qualifying.

As promised, the Frenchman came out swinging, firing one huge forehand winner down the line in the opening game, but after Murray saved a break point with a big serve, it was one-way traffic for the next 90 minutes.

Twelve winners, several of which came in a run of 11 points in a row, helped him race to the first set in 25 minutes

With plenty of vocal support on his third visit to Hisense Arena - the second show court - the Wimbledon champion powered through nine successive games on his way to a two-set lead.

Robert had given the crowd some entertaining tennis but made barely a dent on Murray's defences.

Three service holds spoke of some more dogged resistance in the third set as he fought off six break points at 3-3, but when Murray crunched a backhand return on the seventh, the win appeared to be as good as his.

It was not quite that straightforward. Suddenly edgy, Murray faced break point in his next service game and was then broken trying to close out the match.

Robert had turned the tables and finally started to get the Briton on the run, moving into a 4-2 lead in the tie-break, before Murray reeled off three attacking volleys and a thumping backhand to earn two match points.

Still the 'lucky loser' refused to yield, and when he battled back to take the set, a forlorn Murray challenged the call before cracking his racquet in anger when it went against him, prompting jeers from the crowd now engaged in a contest they had not expected.

Playing only his second tournament since undergoing back surgery in September, Murray was now being extended into a fourth set for the first time since the US Open - and he did not plan to prolong the match into a fifth.

Murray broke to love for a 3-1 lead and, with Robert now feeling the effects of his seventh match of the tournament, there was no second comeback.

A loud "Come on!" and a fist pump towards coach Ivan Lendl and the rest of Murray's team followed after a sixth match point was finally converted, securing a fifth successive Melbourne quarter-final.

Asked how it would feel to take on Federer in a repeat of last year's semi-final, Murray said: "It's always going to be special playing against him."