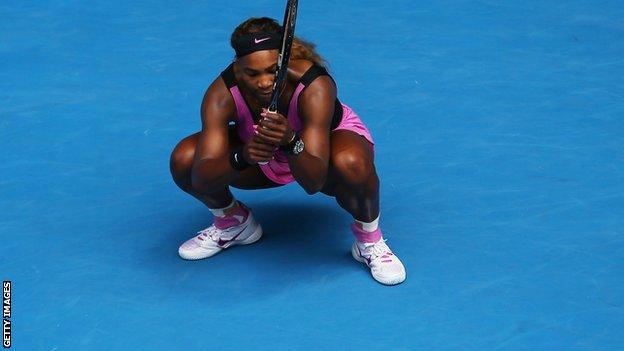 Serena Williams went out of the Australian Open as a back injury hindered the five-time champion against a rampant Ana Ivanovic.

The Serb came back from a set down to win 4-6 6-3 6-3 - her first ever victory over Williams in five attempts.

There had been reports before the match that Williams had a back problem, and so it proved.

"I almost pulled out. I'm such a competitor, I probably should have," said the world number one.

"I don't want to blame anything. I feel like Ana deserves all the credit. I feel she played unbelievable today. I think she went for her shots."

Williams revealed that she did not know the exact nature of her injury but had been dealing with it for "a few days".

She added: "It's not anything that's life threatening or anything. I feel like it will get better. I just need a couple days off.

"Unfortunately I don't have that in a Grand Slam."

The reigning French and US Open champion had been tipped by some to complete the Grand Slam of all four major titles in 2014.

"I have given up on that a long time ago," said the 32-year-old. "I feel like I don't even think about winning four in a row.

"Maybe I can win four in a row, but it seems like in the one year it's kind of difficult for me for whatever reason."

Ivanovic, 26, goes on to face Canada's Eugenie Bouchard in the last eight.

"It's amazing," said the 14th seed. "Honestly, I went on the court and I just wanted to play the best I could. I'm so thrilled."

"Serena blocked her back during practice and after that all the muscles got really tight. She was about to pull out before playing Daniela Hantuchova [in the third round]. She finally decided to try and I don't know how she got through this match, but she did. Today it was better but she couldn't move the way she usually does, so very often she was off balance and couldn't hit as hard or move up to the ball.

"She was not at her best, but not everyone would have beaten her anyway. Ana played a really great match."

Ivanovic is a former world number one and 2008 French Open champion, but since then she has reached just one major quarter-final at the 2012 US Open.

A 0-4 record against Williams gave little cause for optimism either, but from the outset Ivanovic was able to threaten the American's usually impregnable serve.

The Serb fashioned four break points in the opening set, converting one, but was broken twice as Williams edged it.

Ivanovic took over from that point, her once fragile serve holding up well as Williams appeared to struggle with her movement, and she did not face another break point.

Williams was warned for a time violation when serving to stay in the contest and managed to save two match points , but Ivanovic closed it out nervelessly with a love hold after one hour and 56 minutes.

"I was very consistent," added Ivanovic.

"It's not easy playing such a champion, but she's also just a human and I know she has lots of pressure too.

"I just went out there swinging and I think I did that really well."