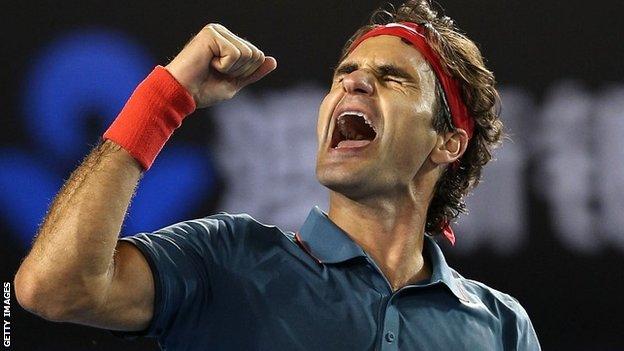 Federer had been on the verge of wrapping up a faultless three-set performance but failed to serve out the match, and then missed two match points in the tie-break.

"Murray appreciates he has come a long way in four months, but not even the pain endured on the training courts of Miami could prepare him for Federer - who is doing a very passable impression of a man in his prime. The strain of saving 13 break points, six of them in one 19 minute game, took its toll - even if Murray was a little passive at the start and didn't return as well as he expects.

"Switching to the clay for next week's Davis Cup tie is not ideal, but with more training and high profile events in Indian Wells and Miami to follow, Murray is building towards what he hopes will be another successful summer."

Murray was fighting to stay alive in only his second tournament since back surgery, and saved six break points in a marathon 19-minute game early in the fourth set.

But the Scot was constantly playing catch-up and eventually he could no longer hang on, as Federer brought his man into the net at 4-3 and flipped a backhand past the 26-year-old for the decisive break.

"I was proud of the way I fought," said Murray.

"I changed my tactics a little bit, started playing a little bit more aggressive, and that was maybe my undoing a little bit at the end, because I really started going for my shots to get myself back into the match.

"Then when I got broken in that fourth set, I went for three balls. Maybe one or two of them weren't there to be hit."

Federer was relieved to come through to clinch an 11th consecutive Australian Open semi-final place.

"Andy played well and put the pressure on me so I'm happy to get the win," he said.

"I probably miss more break points than other guys but I kept my composure and kept the poker face and tonight it worked."

The first two sets saw Federer pick up where he had left off against Jo-Wilfried Tsonga on Monday, serving magnificently and moving forward at every opportunity.

Playing with a larger, more powerful racquet this year, and under the guidance of six-time Grand Slam champion Stefan Edberg, his game was simply too strong for Murray.

By the time he closed out the second set, after only 80 minutes, he had been taken to deuce just once on serve.

Murray was unable to dominate from his home turf of the baseline and could not get his return game going when second serves came his way - and his evening looked as good as over when two errors saw him drop serve at 4-4 in the third.

Federer had not faced a break point all evening but, when the moment arrived to close out the match, the 17-time major winner looked more like the fragile player that had slipped down the rankings last year.

After smashing away a first break point he fired long on the second, and the crowd came alive as Murray yelled in delight at his unexpected second life.

They headed into a tie-break and again Federer took charge, but once again Murray refused to buckle.

Swinging freely from 6-4 down, the Wimbledon champion forced two errors from Federer on match points before powering through to take the set.

The night session on Rod Laver Arena was suddenly electrified as one-way traffic turned into a dogfight, and Murray's battling qualities made for an absorbing fourth set, but it was Federer's attacking instincts that eventually prevailed.

A loud "Come on!" echoed around the stadium when the Swiss finally converted his 10th break point of the set and, given a second chance to serve out the match, he did not blink.

Federer fired a thunderous ace out wide to seal victory, and a real chance to win an unprecedented 18th Grand Slam title.

"It's really a big pleasure for me being back in the semi-finals," added Federer. "I think I've played semis here all the way since 2004.

"For me it's an amazing result again to be in the semis. This one feels different because of the tougher times I've had in Slams, Wimbledon, at the US Open.

"It's nice to be back in the semis and defend my points from last year. Not that it matters at my age."