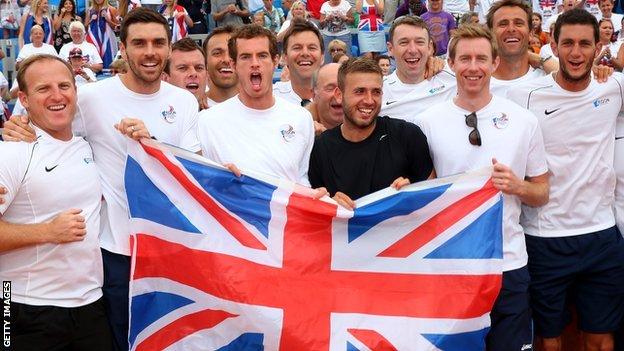 British number two Dan Evans has been left out of the Davis Cup squad to face the United States this month.

Evans played in the last four ties but has been replaced by teenager Kyle Edmund, who will compete with James Ward for the second singles slot.

Edmund, 19, is ranked 222 places below Evans but has more experience on clay, the chosen surface for the San Diego contest, which starts on 31 January.

Andy Murray looks set to team up with Colin Fleming in the doubles.

"I just felt that with the court surface and maybe a little bit on current form, this is maybe not the right timing for Dan - and it's an opportunity for either James or Kyle, who are probably a bit stronger on clay," said Great Britain Davis Cup captain Leon Smith.

"His underwhelming performance in Australian Open qualifying - with Leon Smith watching from the stands - has cost Dan Evans the chance to build on his starring role in last year's stunning win over Russia. He decided against playing a warm-up event in Hawaii this week and has historically struggled to adapt to clay."

Murray is expected to play in two of the four singles rubbers contested in America, with his place in the only doubles rubber also likely providing he comes through the Australian Open unscathed having just returned after back surgery.

Smith says he will ask Murray about his physical condition after the Australian Open, but hopes to be able to select the Wimbledon champion for three rubbers against the US.

Dom Inglot has been called up as a reserve for the first time as captain Leon Smith chooses to narrow his considerable doubles options.

Ross Hutchins, Jamie Murray and Jonny Marray have all been left out.

Evans, 23, played in the victories over Russia and Croatia last year, winning one of his three live singles rubbers.

He also made a breakthrough by reaching the third round of the US Open in September after a successful summer and began 2014 by qualifying for the ATP event in Doha.

However, he suffered a disappointing second-round exit in qualifying at the Australian Open and has little experience of playing on clay at the top level.

Edmund is ranked 372 in the world, but the Yorkshireman is rising steadily and plays most of his tennis on clay.

He has won a title on the surface in the US this year, the fourth tournament win of his career on the Futures Tour, the third level of professional tennis.

It will, however, be a huge step up in class and pressure if he is asked to play a live Davis Cup singles rubber, away from home, against Isner or Querrey.

"I've obviously decided to take both James Ward and Kyle Edmund and I haven't made my mind up yet whose going to play the number two singles," added Smith.

"It's definitely is up from grabs and should it be Kyle, I've got no fear whatsoever about him stepping into that environment and putting in a good performance. I think he can get a win."

Ward, 26, is ranked 165 and has never won an ATP match on clay, but he does have a winning record on the surface on the Challenger and Futures tours. He also has an 8-5 Davis Cup singles record.

British doubles number one Inglot, 27, is rewarded for his good form over the past year with Treat Huey of the Philippines.

The pair reached their second successive Grand Slam quarter-final at the Australian Open.

"Leon's obviously still keeping his options open," said Englishman Inglot, who has risen to 28 in the doubles rankings.

"I'm obviously going to go there and help the team in any way I can.

"If it means just hitting big serves to Andy, or whoever's playing number two singles, then I'll do that. If he needs me to step in and play doubles, then I'll be happy to do that as well.

"I'm pretty confident we can do well as a team. I think Andy can win both singles and between the three of us, Andy, Colin and myself, we're all capable doubles players. Even against the Bryans, we can go and win."

Meanwhile, BBC Sport has secured a three-year deal to broadcast all of Great Britain's Davis Cup World Group matches until 2016.