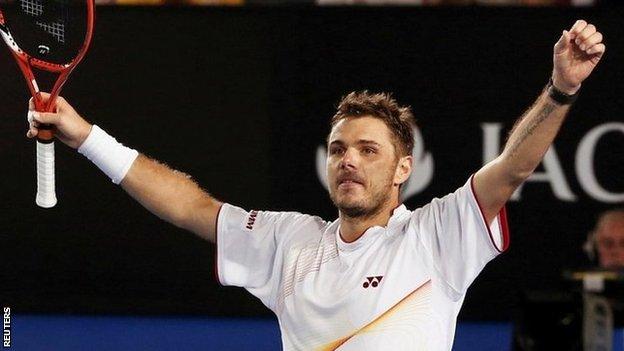 The Swiss eighth seed won 2-6 6-4 6-2 3-6 9-7 to set up a semi-final against Tomas Berdych, and gain revenge for an epic five-set defeat by Djokovic in the fourth round last year.

It was the first loss for Djokovic under the guidance of new coach Boris Becker, and brings to an end a winning streak of 28 matches on tour - and 25 matches over three years in Melbourne.

His last defeat in the Australian Open - which he also won in 2008 - was back in 2010 when he was ill and lost in the quarter-finals to Jo-Wilfried Tsonga.

"I was really focused point after point. I had to stay aggressive, and not give up. I was tired, I was cramping a bit, and I was nervous too. But now I'm going to have an ice bath for a very long time."

Djokovic said: "He deserved this win. I congratulate him absolutely. There is nothing I can say.

"You know, I gave it my best. I gave it all. I tried to come out as the winner. I tried to fight until the last point as I did in a very similar match we did last year in the fourth round, same court, but it wasn't to be this time."

"To see Djokovic make four unforced forehand errors to immediately give back the serve he had broken early in the fifth set must have given Wawrinka enormous self-belief - assuming he still needs it, that is.

"The Swiss showed great tenacity and patience throughout the final set, having been the superior player in the second and third.

"Was Djokovic's decision to serve and volley when match point down inspired by his new coach? Either way, the four-time champion will wish he'd stayed on the baseline."

A 15th consecutive Grand Slam semi-final had looked there for the taking when the Serb rolled through the first set thanks to some loose errors from Wawrinka in game six, but a moment of brilliance turned the match.

Wawrinka won a breathtaking rally with a flowing backhand down the line to break at 3-3 on his way to taking the second set, and the winners kept coming.

Djokovic, 26, threw a few frustrated looks towards Becker in the stands as Wawrinka powered through the third set to take a grip on the match, but finishing the job remained another matter entirely.

There were signs of fragility on Wawrinka's more suspect forehand swing in a tight fourth set, and Djokovic came storming back from 40-0 down to break at 4-3.

After closing it out in a tense game with an ace, the champion let out a huge roar and Becker got to his feet to urge his man on.

Keeping it away from the Wawrinka backhand whenever possible, Djokovic made what seemed to be the decisive move with a break in game three of the decider, only to hand it straight back with four forehand errors in a woeful service game.

Champion run comes to an end

A packed crowd on Rod Laver Arena was now reaching fever pitch as the match clock ticked past three hours, and as serve began to dominate it headed towards a fourth. A re-run of last year's 22-game final set did not seem out of the question.

That match had lasted five hours and finished at 01:41 local time, but Wawrinka was determined to avoid a repeat and his pressure finally told.

Serving to stay in the match for the fourth time, Djokovic found himself match point down when a mishit Wawrinka return dropped in and, in the style of his coach, the Serb gambled on following his serve into the net at the crucial moment - only to steer a forehand volley into the tramlines.

After exactly four hours, Wawrinka had reached his second major semi-final and ended an eight-year, 14-match losing streak against Djokovic.

"It's a really great feeling," said the Swiss. "There were some special moments which went well together in this match, making it for the first time here to the semis, winning my first match on Rod Laver after all these years. It's been a very special match to me."