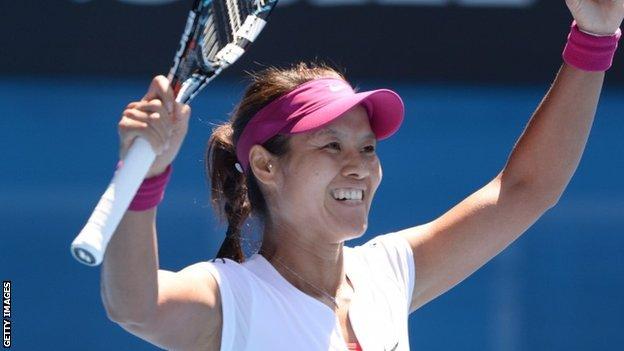 Li Na and Dominika Cibulkova will compete for the Australian Open title after both enjoyed convincing semi-final victories.

Li dominated against teenager Eugenie Bouchard, racing into a 5-0 lead in 14 minutes before winning 6-2 6-4 to progress to her third Melbourne final.

The Slovakian broke in the opening game and was in complete control throughout.

Fourth seed Li remains on course for a second Grand Slam title and a first Australian Open victory as her experience told against Canadian Bouchard, who had never previously been beyond the third round of a major.

China's Li, who reached the final in Melbourne in 2011 and 2013, came back from match point down in her third-round tie against Lucie Safarova and has not looked back since.

She began superbly on this occasion and threatened to blow her opponent away, but Bouchard stopped the first-set rot when she broke at 5-0 down, recovering to trail 5-2 before Li held serve to take the advantage.

Bouchard, 19, used that late improvement to gain momentum in set two and, when she broke to lead 2-0, had won four out of five games and the contest seemed to be alive once more.

But Li broke Bouchard in each of her next three service games to snuff out any prospect of a comeback.

Referring to her previous inability to turn final appearances into wins at the Australian Open, Li said: "Last time was a little bit tough so I will try this time to make one more step.

"I think after working with the coach, it's not only about my technique. I'm playing much stronger on court and more stable from the first point."

Bouchard said: "I'm proud of how I've improved as a player throughout the tournament, but I'm never satisfied with losing.

"I'm always disappointed. I always want to go further and do better."

Cibulkova provided one of the shocks of the tournament in round four when she knocked out third seed Maria Sharapova and she reproduced that form to completely overwhelm Radwanska.

Radwanska had also excelled earlier in the competition, beating two-time defending champion Victoria Azarenka in the quarter-finals, but her play was sluggish and she could not cope with an inspired Cibulkova.

The 20th seed broke Radwanska in the first game of the match and the Pole never recovered.

And when she pounced on Radwanska's misfiring serve in the second game of set two, the fifth seed had no reply.

Radwanska's fate was confirmed when she netted after 70 minutes to give Cibulkova victory and a place in the record books as the first Slovakian to reach a Grand Slam final.

"The most important game was when I won my serve for 5-2," said Cibulkova, 24. "Then I knew I was going to do it. I can't believe this is happening."

Radwanska reflected: "I felt like I was in slow motion. I had a couple of tough matches and I think I was not fresh enough.

"She played well in the whole tournament, but I think I spent twice as many hours as her on court."

The only break of serve came in game eight of the first set as Wawrinka set up a potential all-Swiss final against Roger Federer, who plays Rafael Nadal in Friday's semi-final, which will be live on BBC 2 from 0815 GMT.

"She wants me to lose, because when I lose I can go home. She doesn't yet realise what it means to win. I'm sorry but I have to stay a few more days!" Wawrinka on how his young daughter will react to him reaching the final in Melbourne

"I was excited." Eugenie Bouchard's response to the question: "How excited were you to get a tweet from Justin Bieber?"

"It's an emu. Her name is Sheila. I got a gift even though I lost. Thanks to the 'Genie Army'." And Bouchard enjoyed a parting gift from her army of Aussie admirers

"If I'm not a tennis player, I didn't want to be famous. Maybe everyone is different. I always say after I retire, I want to be a housewife." China's Li Na, 31, looks forward to a day when she's no longer carrying the hopes of 1.4bn people every time she plays tennis