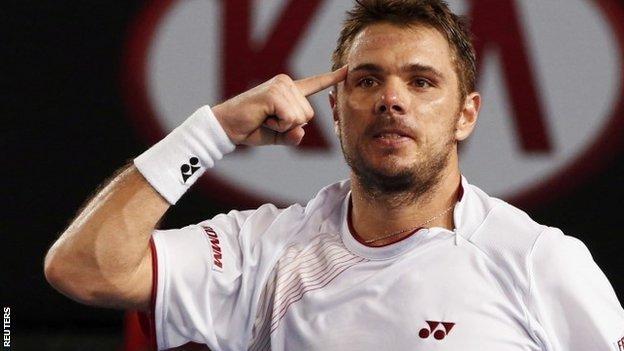 Stanislas Wawrinka beat Tomas Berdych to reach his first Grand Slam final and raise the prospect of an all-Swiss title decider at the Australian Open.

Wawrinka said: "It's amazing, I'm so happy to be here. I didn't expect to make a final in a Grand Slam."

"It would be amazing," said Wawrinka of potentially playing Federer in Sunday's final. "Roger is the best player ever. He texted me last night. He is happy it is the first time two Swiss guys are in the semi-finals. I told him for you it's normal, for me it's not normal.

Wawrinka has never beaten Rafael Nadal in 12 attempts, nor taken a set off him.

Against Roger Federer, his record is slightly better - one win in 14 attempts (on clay in 2009) - but Federer has won the last 11 matches, including a straight-sets win in the Australian Open quarter-finals three years ago.

"I have two days to enjoy this win and then get ready for my first final."

After breaking new ground by reaching last year's US Open semi-finals, Wawrinka is into his first major final.

He followed his five-set win over defending champion Novak Djokovic with another high-class performance that tested his once suspect nerve.

"The match was extremely even and it was really so close," said Berdych.

"It's really hard to find what could be the difference. We both played great. We played a good match. Stan was the one that just took it, and that's it."

As expected in a match between players next to each other in the rankings, a desperately tight contest turned on a few key points.

Berdych faltered first, smashing a towering lob into the tramlines on the first break point of the match and dropping the set in the following game.

It was the only service break of the match, with both men neck and neck in all key statistics as the contest unfolded over the next three hours.

"How ironic that after some ferociously good serving, two double faults cost Berdych in the third-set tie-break.

"Momentum had been swinging the Czech player's way, but the odds on an all Swiss final have just jumped up a notch.

"I wonder if Federer is high fiving Mirka in celebration, as he did when Wawrinka beat Djokovic in the quarter-final?"

Berdych saved a break point in the second set before dominating the tie-break, and seemed to have the momentum at times in the third set but could not convert his first chance on Wawrinka's serve at 4-4.

Another tie-break was required and this time it was the Swiss who took charge after crucial double-faults from Berdych at 3-2 and on set point, leaving the Czech player's team - decked out in blue and white stripes, like their man - looking forlorn.

His serve had impressed for two-and-half hours but Berdych looked vulnerable early in the fourth set, narrowly escaping a break point after three double-faults in the opening game.

It came down to the shootout of a third tie-break and, with much of the Rod Laver Arena crowd behind him - and a few shouts of "Come on Aussie Stan!" - Wawrinka stepped up a gear.

After moving to two match points, the Swiss double-faulted on the first but saw Berdych fire long over the baseline on the second to confirm his place in a first Grand Slam final in 36 attempts.