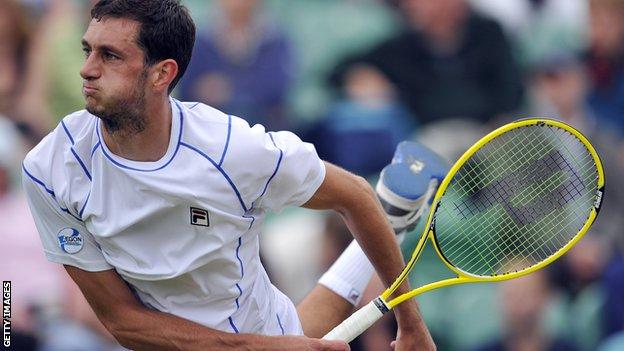 James Ward has been named as Great Britain's second singles player alongside Andy Murray for the Davis Cup tie against the United States.

Captain Leon Smith picked Ward, 26, over Kyle Edmund, who drops out of the squad, for the World Group first-round match in San Diego starting on Friday.

Dominic Inglot could partner Colin Fleming if British number one Murray opts not to play in Saturday's doubles.

Isner, 28, pulled out of the Australian Open with an ankle injury and his absence leaves Sam Querrey as the US's number one singles player.

US captain Jim Courier has named the Bryan brothers - Bob and Mike - in his four-man team for the tie which will take place on a clay court laid down in Petco Park, the home of the San Diego Padres baseball team.

Ward, ranked 175 in the world, has played a major part in Great Britain's rise back into the World Group, including a five-set victory over Dimitry Tursunov as the team came back from 0-2 down to beat Russia in Coventry last April.

He played a practice set against 19-year-old Edmund on Wednesday afternoon and has been picked ahead of the world number 336, who won a clay court Futures tournament and reached the final of another, in Florida, over the past two weeks.

Inglot, 27, is in the squad for the first time, but is likely to remain a reserve if Murray is fit after his opening singles rubber.

Murray will play in singles matches on Friday and Sunday, with his involvement in Saturday's doubles dependent on his condition following his recent return from back surgery.

The Wimbledon champion has raised concerns over the court, which will be a fast one, especially when the sun shines on it during the first match of the day.

Inglot took a tumble on the first day of practice, although it is hoped that as more clay and water are added to the surface, it will become easier to play on.

"It's not really clay to be honest," Murray, the world number six, told BBC Sport. "It's not like traditional European clay courts.

"It's a very, very slippy court. It's quick. It's a lot quicker than the surfaces we play on in Monte Carlo, Rome and Madrid, so it's been different.

"I'm hitting the ball fine, it's just getting used to the movement. All the players have been struggling with it because, like I say, it's very slippy."