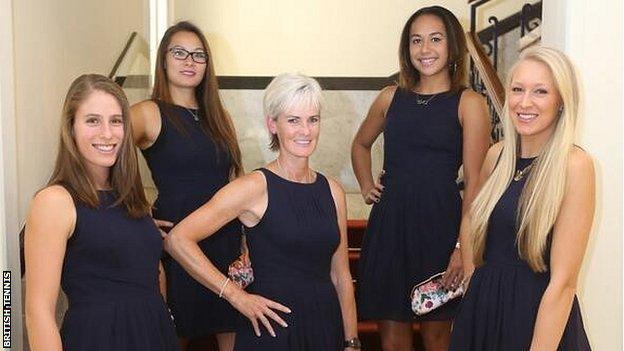 Great Britain is one of 17 nations in Budapest this week seeking to secure a play-off tie for a place in the Fed Cup World Group II.

In a round-robin format, they will face Latvia, Hungary and Romania in Group B.

The winners will play either Ukraine, Austria, Slovenia or Israel on Saturday to determine one of two qualifiers.

Number one Laura Robson has withdrawn with a wrist injury, so the GB team now consists of Johanna Konta, Heather Watson, Tara Moore and Jocelyn Rae.

All four British players are aged 22 or under.

Moore, 21, will make her Fed Cup debut, having made a maiden Wimbledon appearance as a wildcard entry last year, losing 7-5 5-7 7-5 to Estonia's Kaia Kanepi in the first round of the women's singles.

Last year Britain reached the play-off stage but were denied a place in the World Group II, the second highest level of competition, when they were beaten 3-1 by Argentina.

Their performance lifted them to 17th in the Fed Cup rankings and gave them a seeded position this year, but were they to finish bottom of their group this week, Britain would face a relegation play-off on Sunday.

Great Britain have never won the Fed Cup but are one of only four nations to appear in every competition. The last of their four final appearances was in 1981.

GB captain Judy Murray said: "Euro Africa Zone Group I is a notoriously tough one to get out of. Two teams survive from a starting line-up of 17 and it means beating four countries in four days, but we have managed to do that in 2012 and 2013.

"Our group is a tough one with Romania particularly dangerous as they have two players in the world's top 25 and another two in the top 65.

"We have a young and promising team and our goal will be to qualify for a third successive play-off for a place in World Group II which would give us home and away ties and a huge opportunity to promote women's tennis."