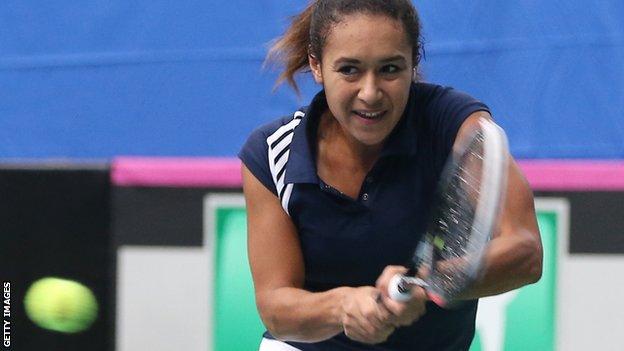 Heather Watson and Johanna Konta both won to help secure Great Britain a 2-1 victory against Latvia in their Fed Cup Europe/Africa Zone Group I match.

Watson beat Jelena Ostapenko 7-5 6-1 to give Britain the ideal start to the Group B round-robin clash in Budapest.

Konta then claimed a battling 6-3 4-6 7-5 victory over Diana Marcinkevica before Latvia won the doubles match.

Great Britain have never won the Fed Cup but are one of only four nations to appear in every competition. The last of their four final appearances was in 1981.

Britain, captained by Judy Murray, face Romania on Friday and then hosts Hungary on Saturday.

Britain are one of 17 nations competing for a play-off tie in the Fed Cup World Group II, the second highest level of competition.

Last year, Britain reached the play-off stage but were denied a place in the World Group II when they were beaten 3-1 by Argentina.

Number one Laura Robson is absent from the British team because of a wrist injury, so the GB squad consists of Watson, Konta, Tara Moore and Jocelyn Rae.

Rae teamed up with Watson for the concluding doubles match on Wednesday but they lost to Latvian duo Diana Marcinkevica and Jelena Ostapenko 6-3 6-7 (4-7) 7-6 (7-5).