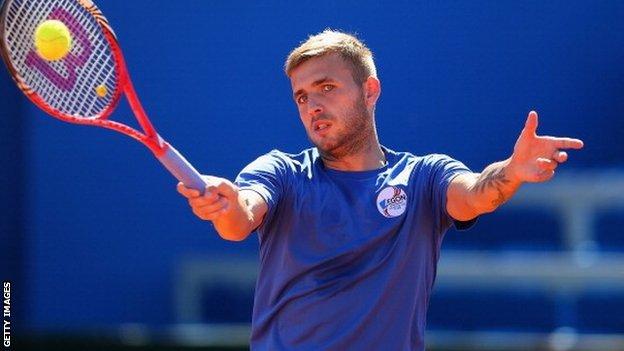 Dan Evans's bid to reach his first ATP Tour final ended in defeat as top seed Tommy Haas battled back from a set down to reach the Zagreb Indoors final.

British number two Evans took the first set but was beaten 5-7 6-4 6-3 by the German in just under two hours.

Evans, 23, was the first British man aside from Andy Murray to reach an ATP semi-final since James Ward in 2011.

He can expect to rise from 147 to around 124 in the world rankings after his impressive performances in Croatia.

The British number two had lost to Germany's Bjorn Phau in qualifying and only made it into the main draw as a 'lucky loser' after Radek Stepanek withdrew with a heel injury.

But Evans made the most of his second chance and went on to beat world number 106 Jan Hajek in the first round, the 148th-ranked Michael Berrer in round two, and reached the semi-finals with victory over Philipp Kohlschreiber, the world number 27.

Evans, left out of Britain's Davis Cup team for the victory over the United States, was unable to add world number 12 Haas to his list of scalps.