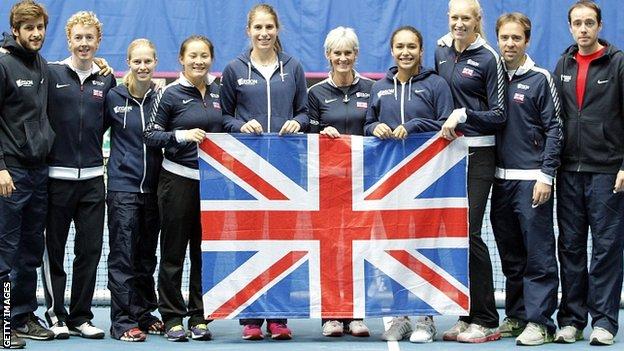 Wins for Tara Moore and Heather Watson ensured Great Britain ended their Fed Cup campaign on a positive note with a 2-0 victory over Austria in Budapest.

Britain's hopes of promotion from the 16-team Europe/Africa Zone ended in the group stage, but they recovered to beat Austria in the ninth-place play-off.

Watson then saw off world number 38 Yvonne Meusburger 6-4 6-2 to claim her fourth singles victory of the week.

Following on from her win over Romania's 26th-ranked Sorana Cirstea on Friday, it is the first time in Watson's career that she has beaten two top-40 players in the same week.

However, captain Judy Murray will see her team's ranking slip from 17th after failing to match the past two years, when Britain have made it through to the World Group II play-offs.

"It was great to finish on a winning note after a challenging week," Murray told the LTA website. "Tara came out really strong in her match, she was a real firecracker, and Heather was amazing today.

"I'm very proud of the whole team. The only shame is that we won't be playing Fed Cup again for another year, but we are looking forward to 2015."

In the elite World Group, defending champions Italy beat the USA 3-1 in Cleveland and go on to face the winner of the rain-delayed tie between Spain and the Czech Republic in the semi-finals.

Australia thrashed a weakened Russia 4-0 in Hobart to set up a last-four clash with Germany, who beat Slovakia 3-1 in Bratislava.