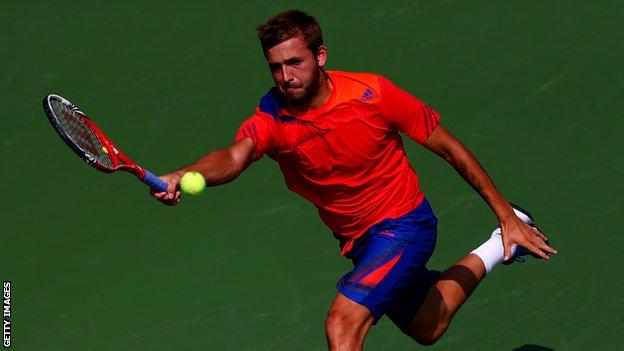 British number two Dan Evans has risen to a career-best world ranking of 123.

The 23-year-old from Birmingham, who played in his maiden ATP semi-final last week, moves up from 147 in the world rankings.

The top 100 claim automatic entry to the main draw of all Grand Slams.

Other than current world number six Andy Murray, the last British player to approach the top 100 was Alex Bogdanovic, who climbed to 108 in 2008.

Evans only made the main draw at last week's tournament in Zagreb as the "lucky loser", having lost to Germany's Bjorn Phau in the qualifying rounds.

However, when Radek Stepanek withdrew with a heel injury, he seized his chance. He eventually lost in the semi-finals to top seed Tommy Haas, who came back from a set down to win 5-7 6-4 6-3.

Last year Evans reached the third round of a Grand Slam for the first time at the US Open, made the third round at Queen's Club and played in the GB victories against Russian and Croatia in the Davis Cup.

However, after losing in qualifying at the Australian Open in January, he was left out of the GB Davis Cup squad in favour of teenager Kyle Edmund.

Evans's next tournament will be the ATP event in Marseille next week.